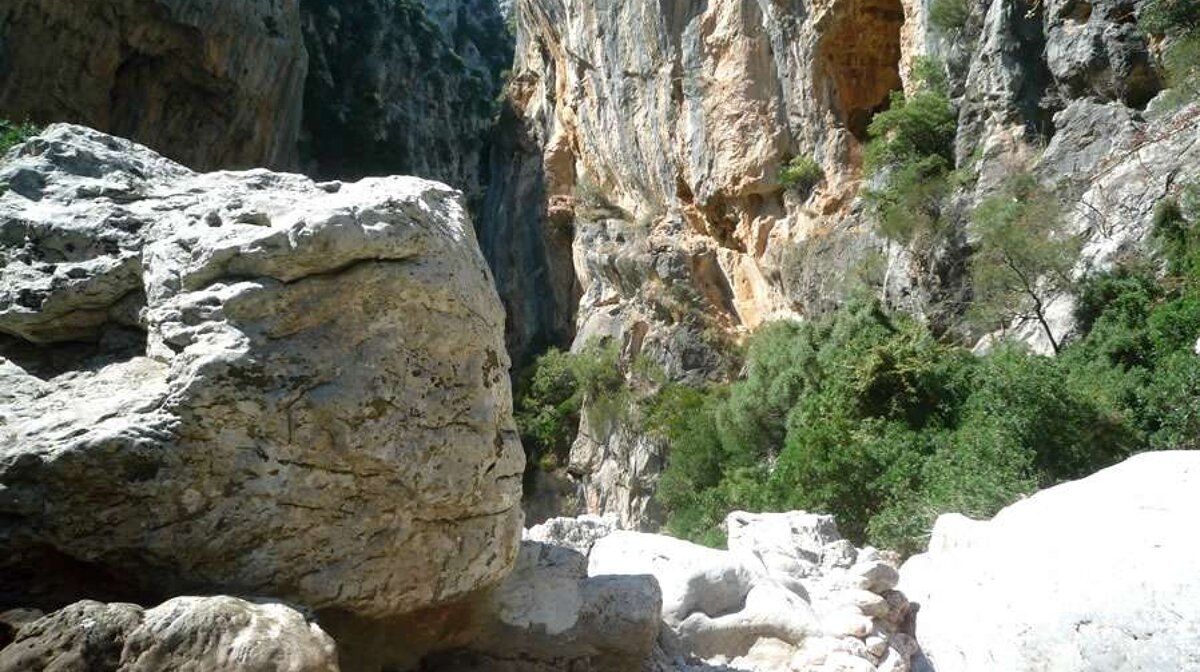 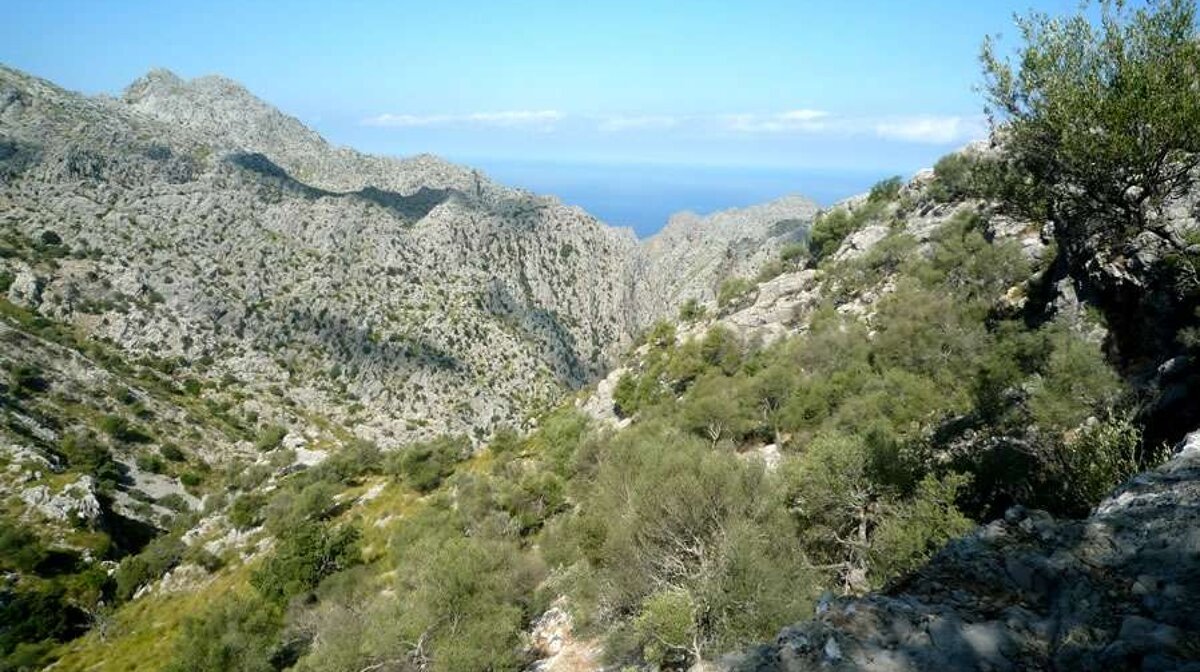 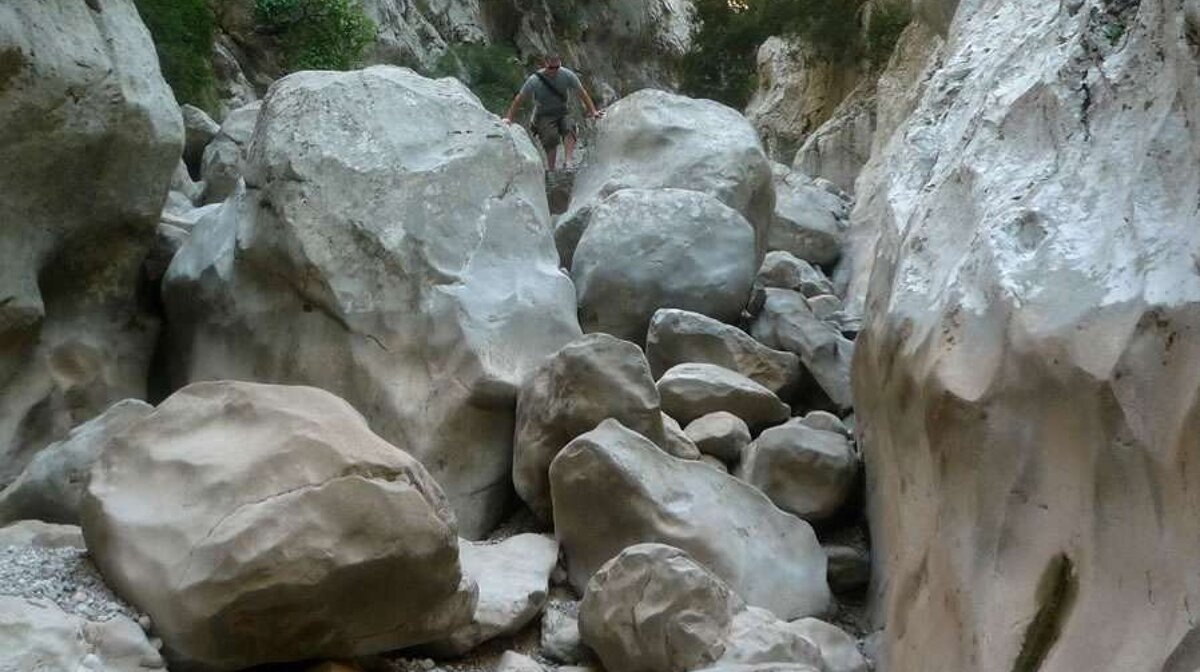 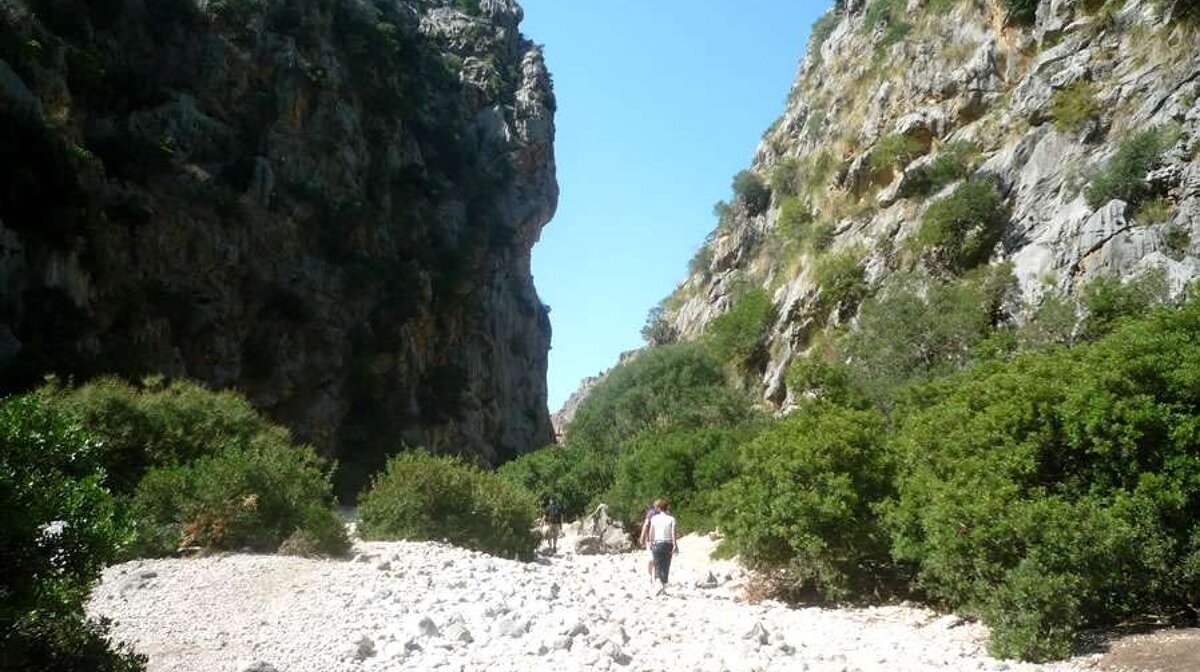 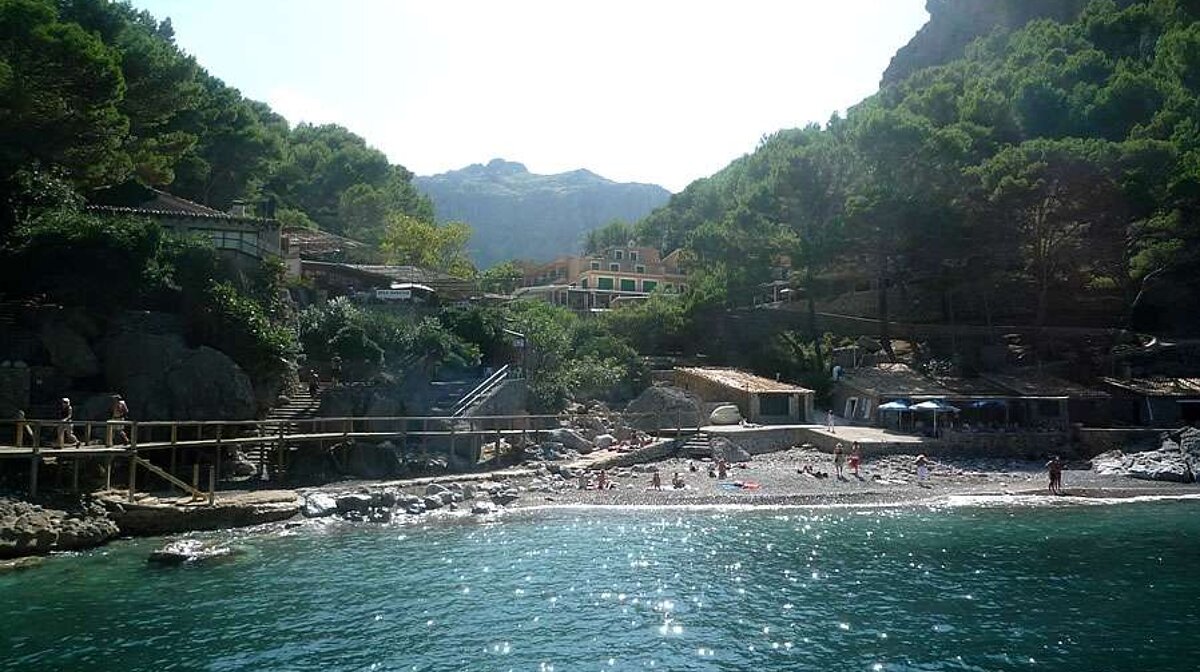 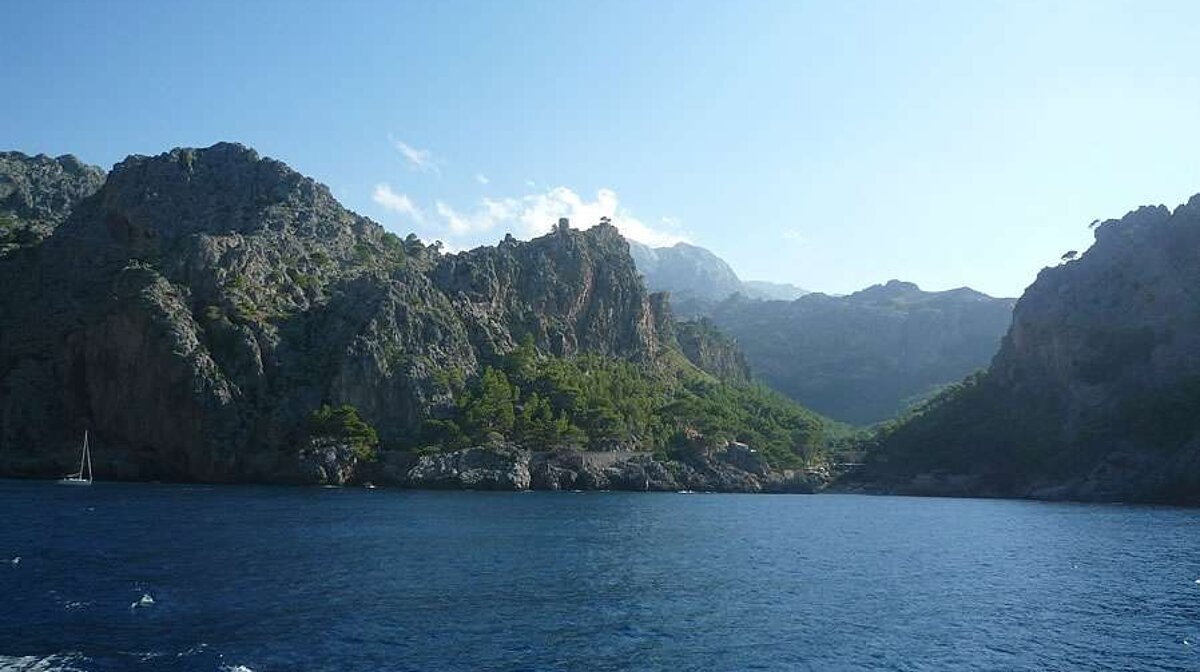 The start of the gorge at the bottom of the valley

The view from the top - the start of the walk

Big boulders to scramble over!

Coming out at the beach of Sa Calobra

The coastline from the boat from Sa Calobra to Port Soller

Having bravely risked my limbs to bring you an account of diving with sharks at Palma Aquarium I was convinced that I was the most extreme person in Mallorca. Red Bull flowed in my veins, fear had been banished into my bedroom wardrobe, and I chortled in the face of death.

When it was suggested that I follow up my heroic outing in the shark tank by going hiking, I was understandably unimpressed. I am the man who swims with predators! I have stared death in the eye and he blinked first!! Isn't there a Python I can wrestle? A Sunday afternoon stroll does not sound that exciting.

The proposed route was along the "Torrent de Pareis" and a little research showed that this was the most physically demanding walk on the island. A five mile scramble over boulders along a dried river bed that takes between four and five hours.

The walk starts in Escorca, in north west Majorca, and finishes in Sa Calobra on the coast. From Sa Calobra our plan was to then take the ferry to Port d'Soller. This posed something of a logistical conundrum. Starting in one place and finishing in another was, as I'm sure you can imagine, inconvenient. Especially as neither our departure point or destination were anywhere near home. However such trifles were not going to stop me I had overcome bigger obstacles before; did I mention I swim with sharks?

With one car parked in Port d'Soller we climbed into a second car and set off for Escorca.

The road through the mountains provided spectacular views and some "interesting" head-on encounters German tour buses.

Once we arrived at our start point we noticed that everyone else setting off on the walk had hiking boots and back packs, some had telescopic poles and even ropes! But having spent a number of summers climbing in Chamonix I felt sure that we were more than prepared for what lay ahead.

The start of the walk was a steep descent down to a grassy valley. The route was fairly obvious and the path clear. There were a few occasions where concentration and careful footing were needed but on the whole it wasn't too much trouble.

Once into the gorge itself the views were amazing. Really. Truly. Amazing. The high walls either side of us rose over a hundred feet to a clear blue sky and the boulders that had been washed down the river bed were the size of cars, vans and even houses. There was no clear route but it was not going to be easy to get lost; just keep following the river and climb over anything in the way. Simple.

"I'm Indiana Jones" I thought as I climbed over huge rock formations. I had to admit that this was much more exciting and interesting than I had thought it would be.

"I'm a puma!!" The Frenchman was also enjoying himself. "Watch me leap like a puma!"

Squeezing through small gaps and picking our own route through the jumble of huge rocks was great fun and whenever I paused and took my eyes off my feet to look up at the cliffs either side of  me, it made me smile with childish excitement. It was a real adventure.

We passed a number of groups who did not appear to be enjoying the adventure as much as we were. A rather nervous group of Germans were moving very slowly and cautiously through some of the trickier sections and using ropes to lower each other down some of the larger descents.

I didn't need their rope. I was Indiana Jones and I was on an adventure.

After two hours of adventuring I started to notice that my feet were a little sore and I was getting quite hungry.

After three hours I had turned from Indiana Jones into Paris Hilton. It was hard work and I don't like hard work. "Are we nearly there yet?" I whined.

It turns out that four to five hours is how long it takes to complete the walk and I'm now sure that "little old ladies" don't even attempt this route. By the time we arrived in Sa Calobra I was hungry, thirsty, hot and tired. Scrabbling and scrambling over rocks so big that I'm sure they have their own gravitational field is really difficult and we hadn't packed a lunch which was definitely a mistake.

Sa Calobra has a regular stream of tourist boats stopping throughout the day so it is relatively easy to hop on and enjoy a leisurely sea trip down the coast to Port de Soller. The views of the west Mallorcan coastline from the boat are as good as it gets and the journey takes around an hour. Times vary according to the season, so check the boat schedules before you go!

Despite my climbing credentials and unquestionable bravery I did find the walk hard work. I would certainly recommend a visit to the gorge as the high walls and huge boulders are worth seeing but if you are not fit and active then start in Sa Calobra and turn around when you have had enough.

If you do want to try this walk it is probably worth hiring a guide. Not only will they help you with picking out the best route but they can drop you off and pick you up so you don't need two cars.

So it turns out that going for a Sunday afternoon walk in Majorca was nearly too much for me and that contrary to my initial belief I am not Indiana Jones. Shame really, I would have looked good in that hat.

For more information on hikes in Mallorca have a look at our Hiking & Walking page, or for guides, see our Adventure Companies listings.