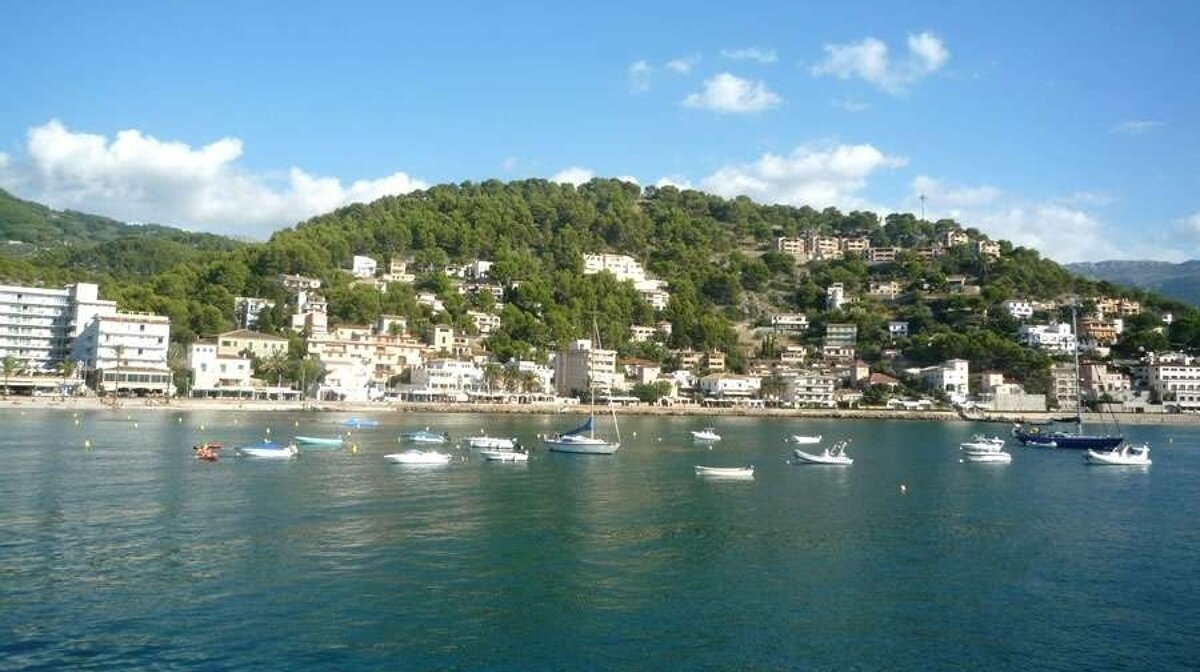 Living near the sea in the Port of Soller, Majorca, has many advantages.  Waking to the sight of the perfect horse shoe bay surrounded by mountains is still a thrill.  The beach is coming to life with strategically placed tin bins which are used by the local bar owners to burn the bamboo.

What am I talking about?  Well, let me explain - the torrents that run down from the mountains empty their crystal clear water into the sea when the water courses are full.  At vast expense the rain and snow water ends in newly built tanks under the sea and is then piped to Palma de Mallorca.  It is true that Palma drinks Soller water but sometimes the volume is too great for the system to cope.  At those times we get the rushing water disgorging itself, and everything in its wake, into the bay.  Bamboo is particularly vulnerable and ends up being washed back onto the beach in huge mounds.  The bar owners need the beach to be pristine so they are out there every day burning the bamboo.  At first sight it is bizarre but like most things once you understand, it all makes perfect sense!

The Port of Soller is the base for wonderful sailing opportunities which I have never availed myself of - until now. I love the beach for its social life and a gentle swim in the sea when it's hot enough but getting on a yacht and sailing out to sea has not been a priority. My brother wanted to celebrate his birthday with friends on a yacht sailing out of the Port of Soller. And so, this is exactly what we did.

The day was beautiful and the sea ever so slightly bumpy when we set sail for our paella lunch in the Mirador de na Foradada.  Turning left out of the bay and heading towards Deia we had the sea all to ourselves and felt very small and insignificant alongside the towering, rugged cliffs.  An hour or so later we were approaching the bay where we were to drop anchor and head for shore by dinghy.  A helicopter was hovering overhead as we came near land and it was lowering a line. We assumed that the rescue service was on a training mission and watched with interest as the first paramedic was lowered on to the ridge followed by another.

We started the climb up the rocks to the restaurant at Foradada and found our way to a table overlooking the sea but the place was like the Marie Celeste – no one was there.  We had booked our lunch and the restaurant was clearly open but no staff.  Then we could see what was happening. The rescue mission with the hovering helicopter was for real and all the staff from the restaurant had gone to help.  We watched as the stretcher was lowered and an injured climber was securely fastened on to the bed and winched up into the helicopter and off to Son Espases Hospital.  We marvelled at the skill and bravery of those pilots and doctors and were grateful for them.

The food was great and the setting was magical overlooking our own secluded bay and, all too soon, it was time to set sail back to the Port of Soller as the sun was thinking of setting.  It was a great experience and one that I will definitely do again.  A sunset dolphin watching trip appeals to me now!