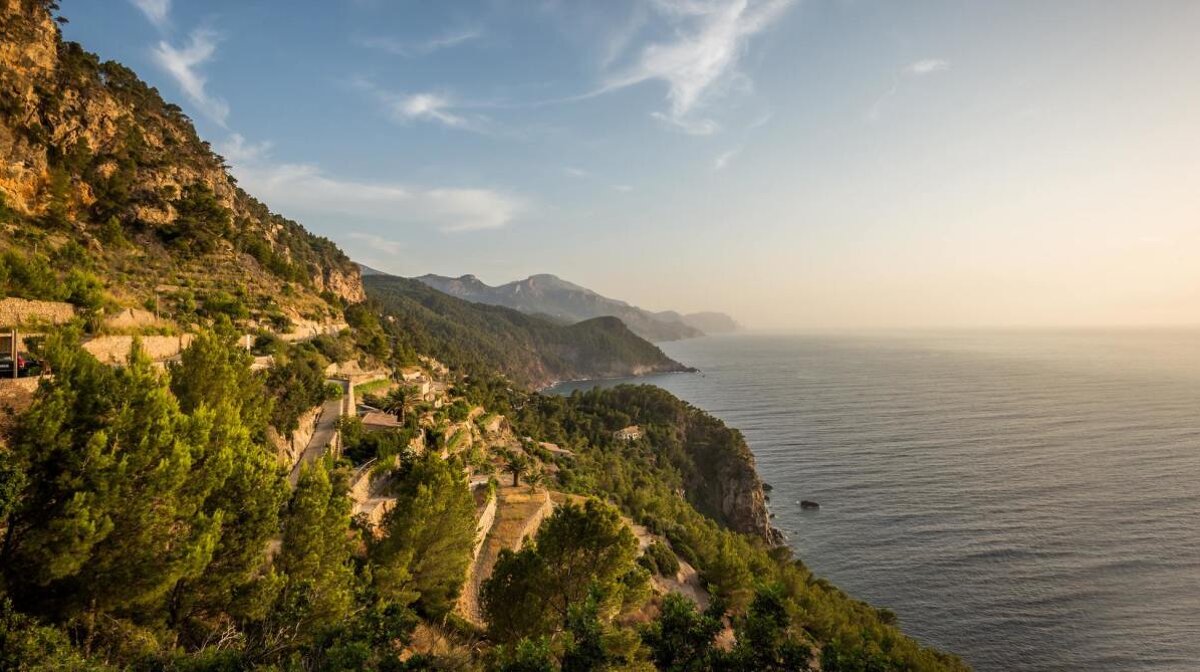 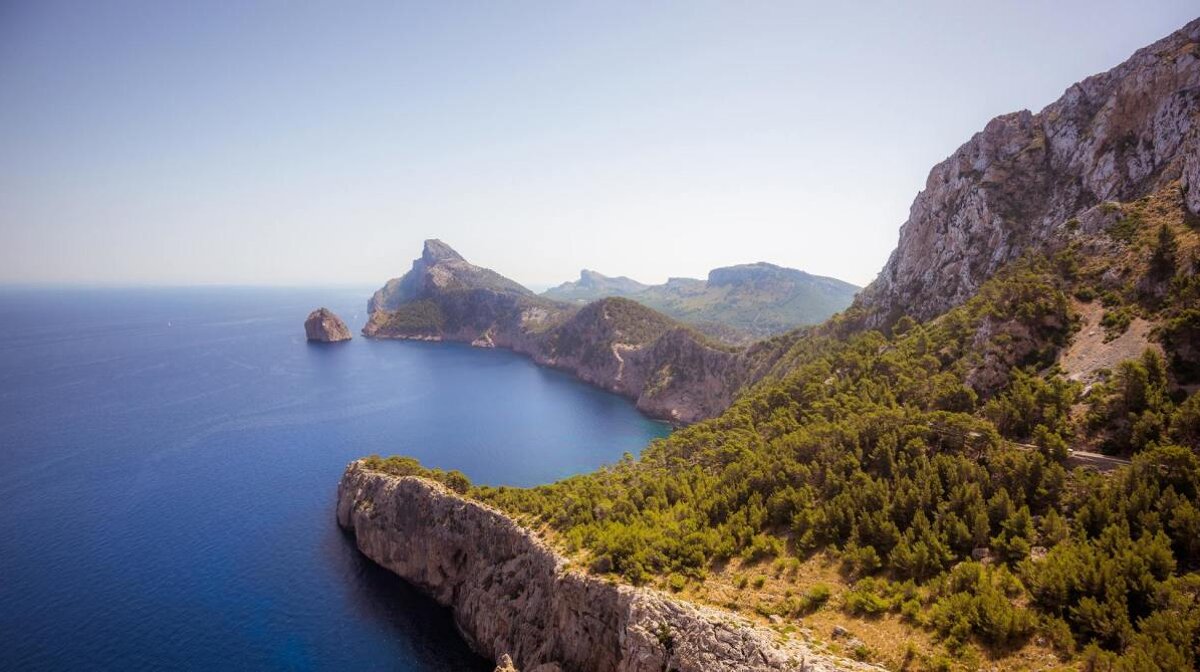 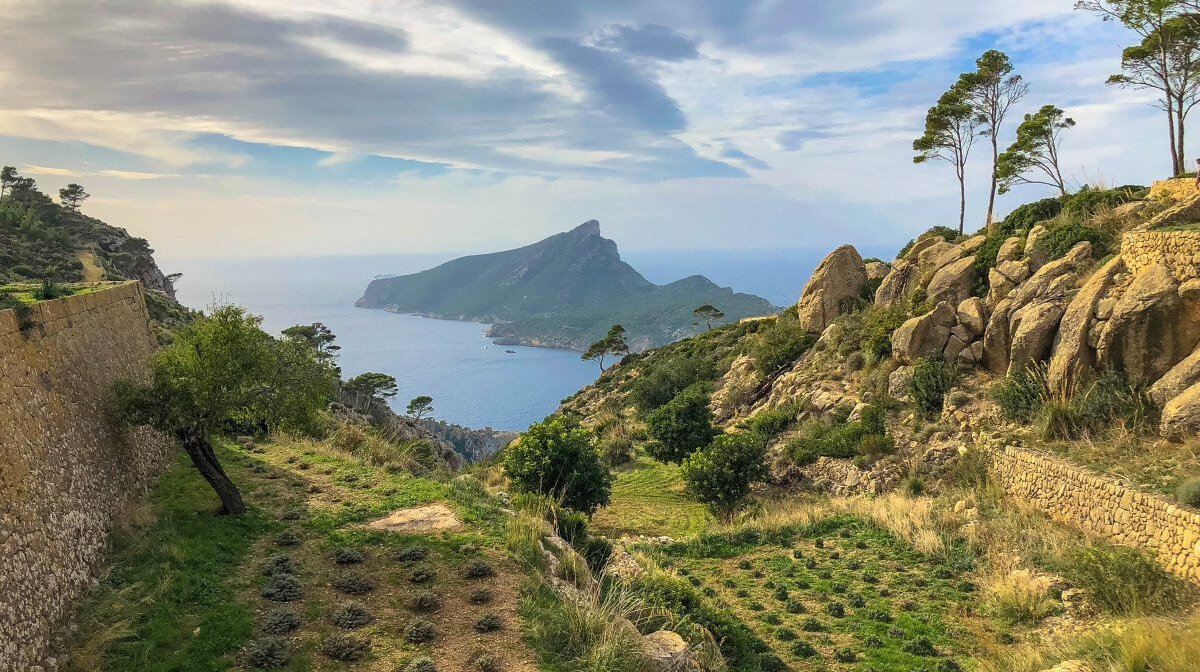 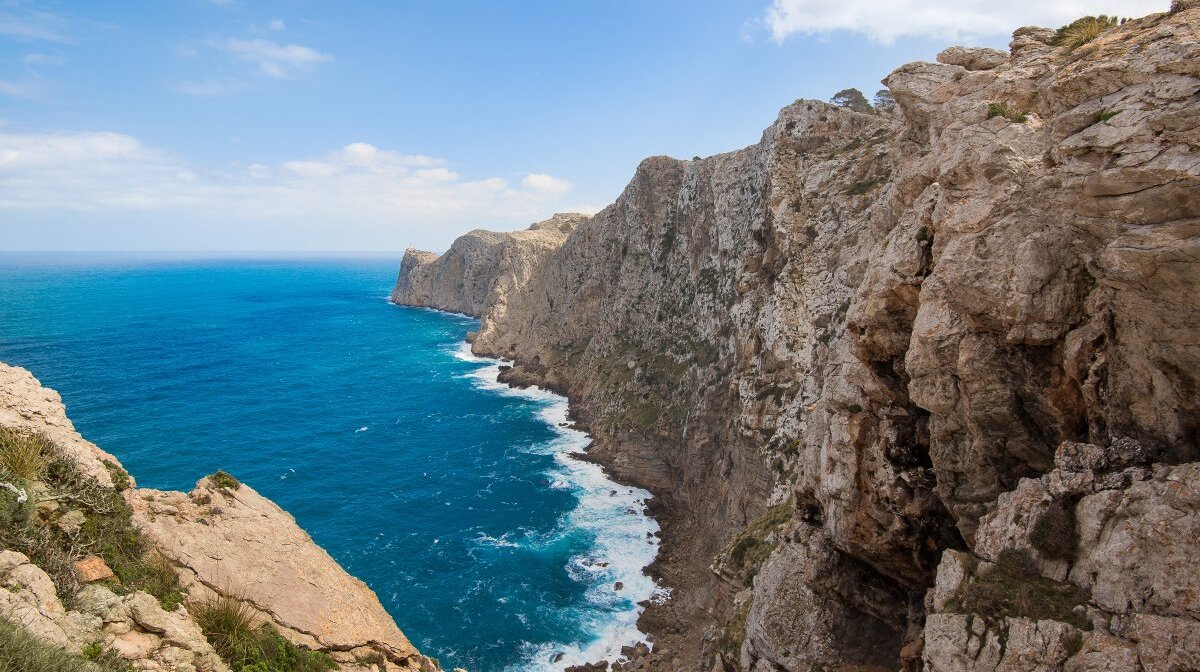 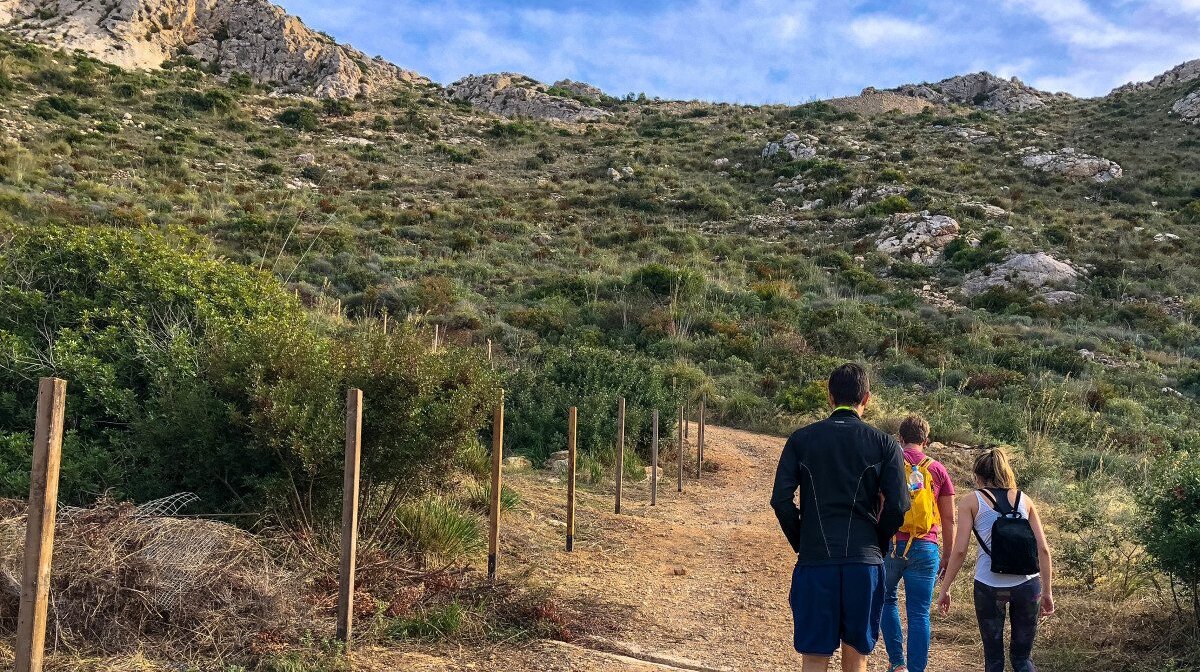 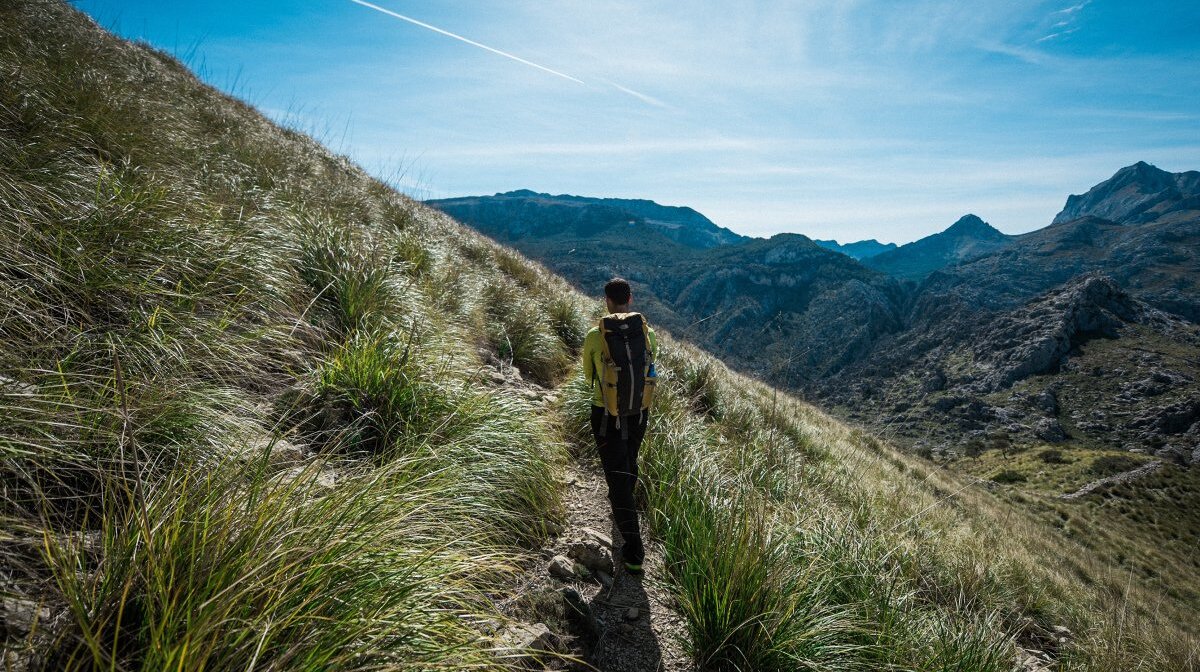 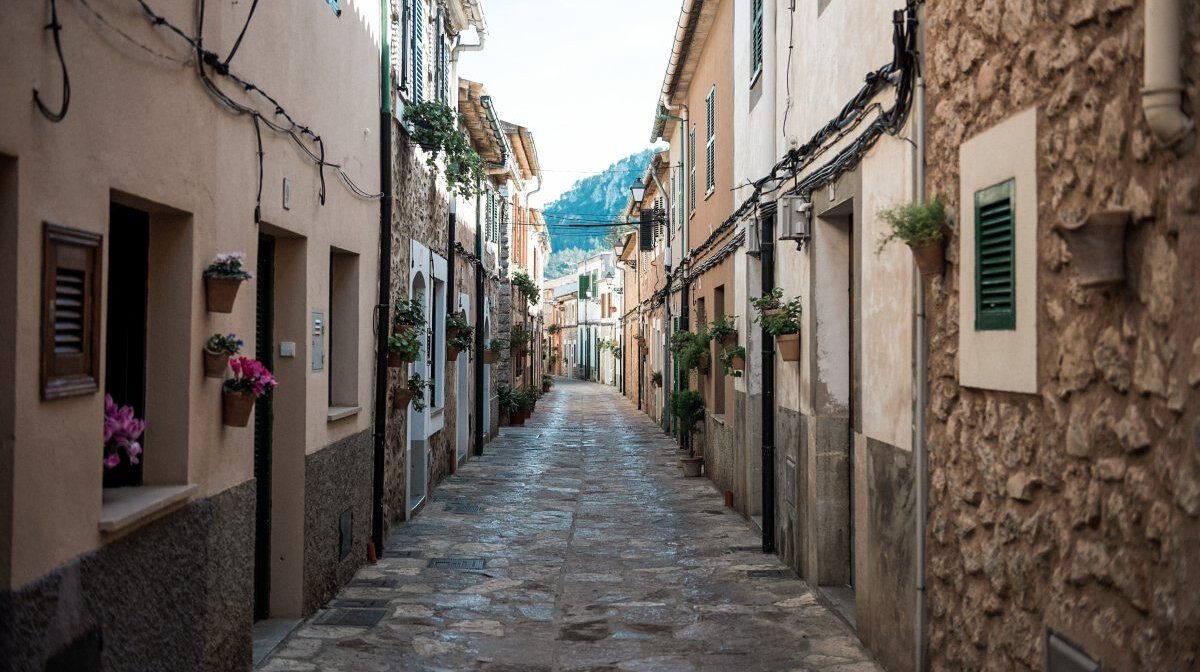 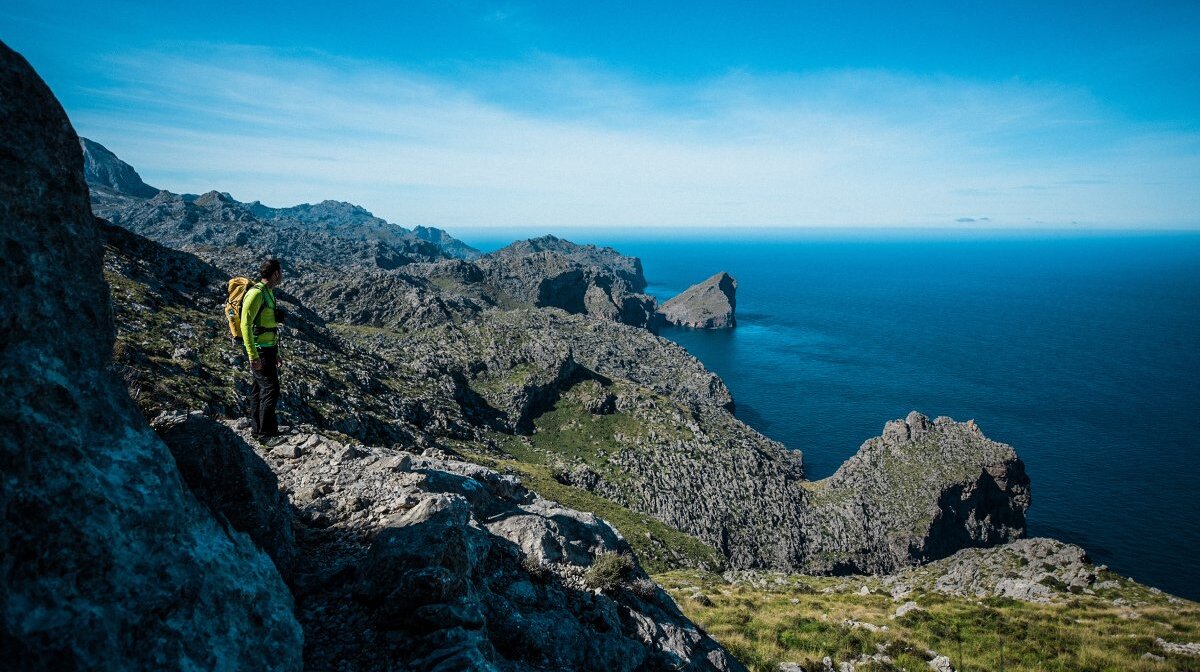 The village of Esporles

The Serra de Tramuntana mountains (translated as the "mountains of the north wind") run the length of Mallorca's northwestern coastline extending for almost 90km and claim some of the island’s most magnificent scenery. In 2011, it was declared a world heritage site by UNESCO under the cultural landscape category.

In a nutshell, the Serra de Tramuntana runs for 88km, from Andratx to Pollença, occupying 30% of the island's terrain at more than 1000km2. Ten peaks are over 1,000m here, most concentrated in the area around Lluc. The highest mountains are Puig Major (1,443m), Puig Massanella (1,348m) and Serra d’Alfàbia (1,069m). There are no rivers running through the Serra de Tramuntana though there are several mountain torrents which swell rapidly after rain. The Cuber and Gorg Blau reservoirs residing here are essential resources on an island so often affected by drought.

Much of the Serra Tramuntana consists of forested hills that give way to barren crags and peaks and the odd derelict blonde stone house or monastery. The mountain landscape could be described as timeless, as are the traditional mountain villages that dwell here. The western coastline is primarily rugged, with few beaches but instead pine-covered slopes leaning into the sea. Traces of the area’s history are still very much present in the form of ancient irrigation systems and dry stone terraces dating back to the Arabic occupation, where they made the most of the difficult agricultural landscape in the mountains.

The people of Mallorca have good reason to be grateful to the mountains - in winter they act as a buffer, shielding the plain from the fierce Tramuntana wind and absorbing most of the island's rain and snow. In summer, they provide a cool retreat from the heat of Palma and the south.

Villages in the Serra de Tramuntana

The mountain villages in the Serra de Tramuntana are wonderfully pretty and well worth visiting in their own right. The traditional blonde stone buildings and quaint cobbled streets make them very charming.

Valldemossa should definitely be on your hit list. It famously captured the heart of international musical legend Frederic Chopin and his lover George Sand, and you can now visit the cell they stayed in within the ancient Real Cartuja monastery.

Artists and well-heeled visitors tend to flock to Deià. Its beauty caught the attention of Robert Graves a British writer and poet and later Sir Richard Branson who developed a wonderful hotel retreat here, La Residencia.

Banyalbufar is a small coastal village famous for its terraced hillsides developed by the moors while Fornalutx is often described as the prettiest little village in Spain! Some of these villages host some first-class music festivals in the summer months along with other highly regarded cultural events. Keep your eyes peeled for The Chopin Classical Music Festival held every August in the spectacular grounds of the Carthusian Monastery in Valldemossa.

At the foot of the mountains, you will find popular towns like Sóller, Pollença, Andratx and Alaró, all of which offer stunning mountain backdrops. If you are planning on basing yourself within close range of the mountains you will find plenty of boutique hotels and traditional rustic fincas in the vicinity. Foodies will be pleased to know that these mountains also provide some first-class restaurants to try, with local and international cuisine on the menus.

Hiking in the Serra de Tramuntana

The mountains are best seen slowly on foot. It gives you the chance to get up close and personal with the wild rosemary, hear the sheep bells, frighten the goats, breathe in the fresh air and marvel at pine trees growing out of red rock. In recent years Mallorca has become known as one of Europe’s top hiking destinations. There’s an impressive selection of hiking routes available for all levels of ability, from steep climbs to gentle coastal routes.

The GR221 Dry Stone Route (or ‘Ruta de Pedra en Sec’) is one of the most iconic routes. Here walkers take to the ancient paths otherwise called dry stone terraces linking the mountain villages, hence its name. The mountain villages are a welcome break to replenish yourselves after all that hard work. There are mountain sanctuaries offering cheap accommodation and food, aimed at those who want to complete all 8 stages of the route. It’s possible to book this up in advance through the Consell de Mallorca website.

For more information and a selection of hikes in the mountains, take a look at our Walking Guide.

Cycling in the Serra de Tramuntana

Of course, the Tramuntana Mountains hold great appeal for cyclists, both road and mountain types. The most famous route is that to Sa Calobra, a great descent with plenty of bends down to a beautiful coastline. The most dramatic drive of all is the C710 from Sóller to Lluc where you will experience traversing tunnels and gorges on your way between Puig Major and Puig Massanella. Other popular routes also include rides from Sóller to Valldemossa, Sóller to Pollença and Andratx to Banyalbufar. The island attracts a whole host of international cyclists with world famous names making Mallorca their base for training. Keep an eye on our events calendar for high profile cycling events taking place on the island.

If you have to drive, try to avoid the peak months of July and August. Take care because the roads here are the most dangerous in Mallorca and the endless procession of hairpin bends requires total concentration. Just remember to take the roads slowly and watch out for cyclists.