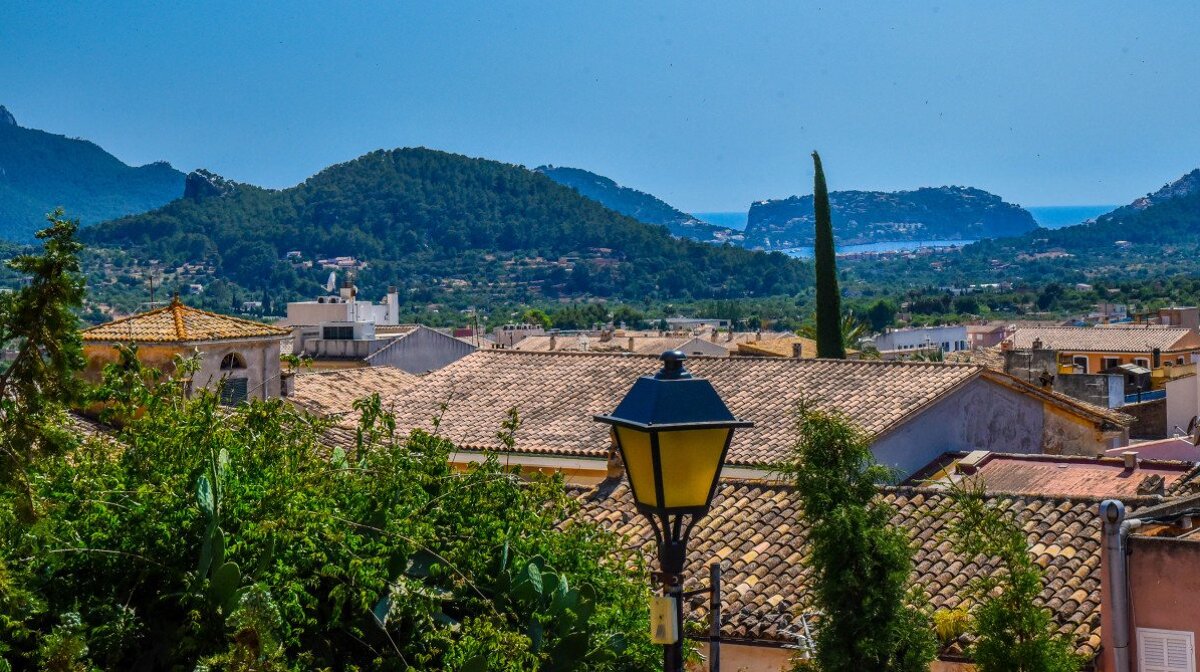 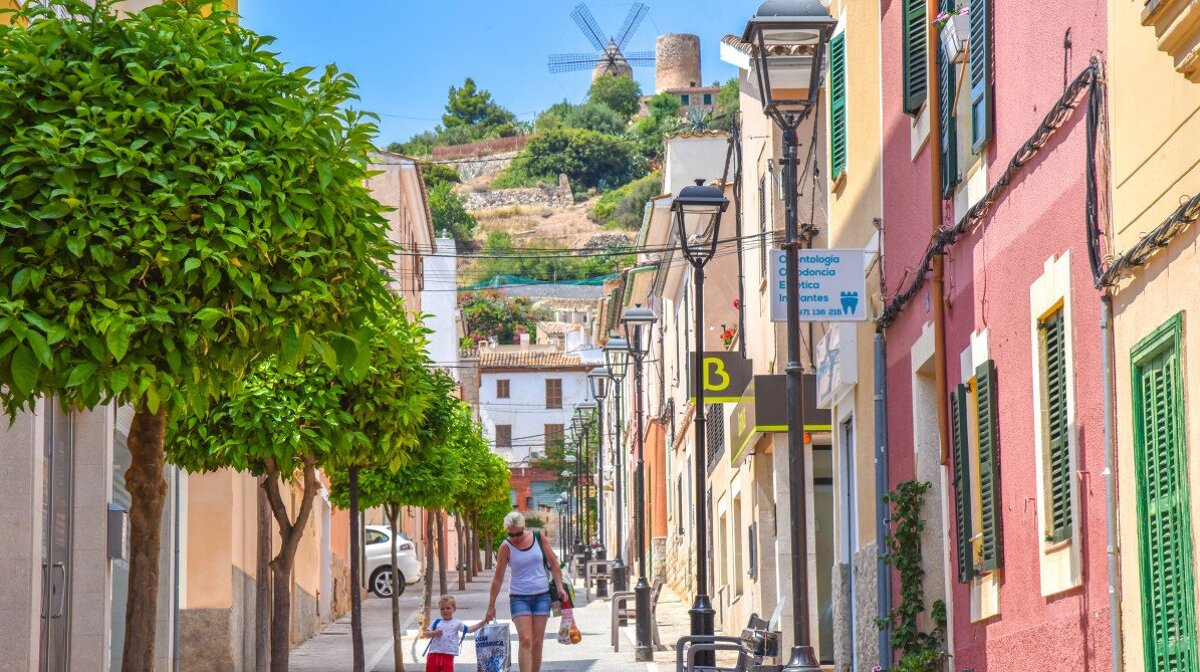 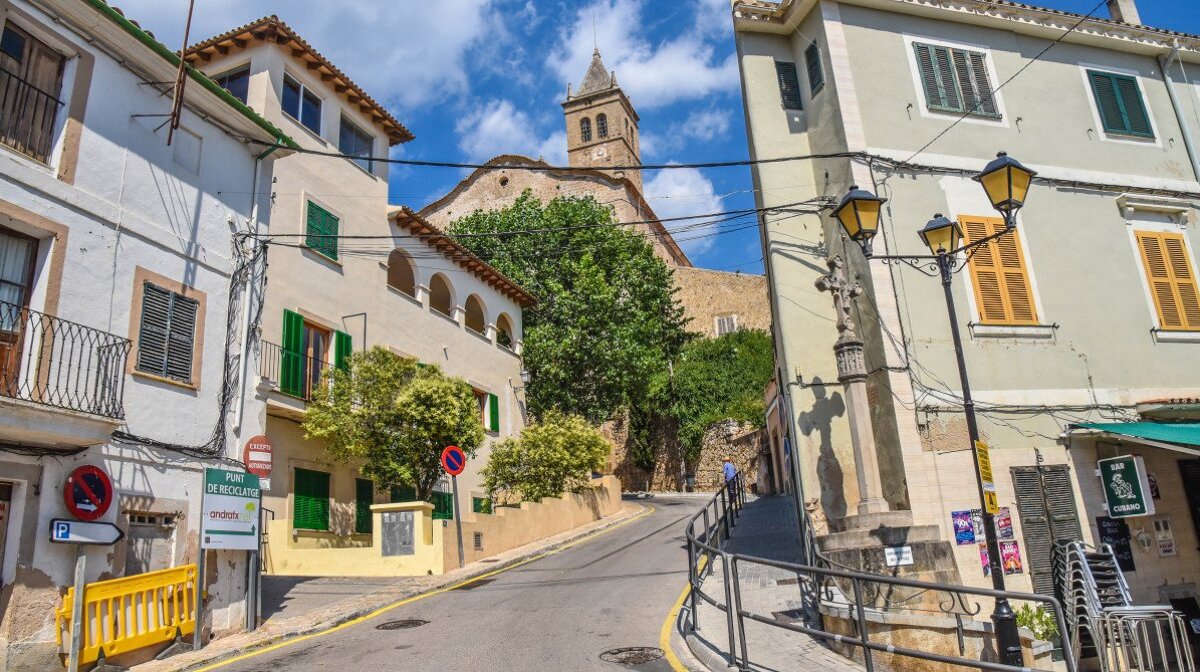 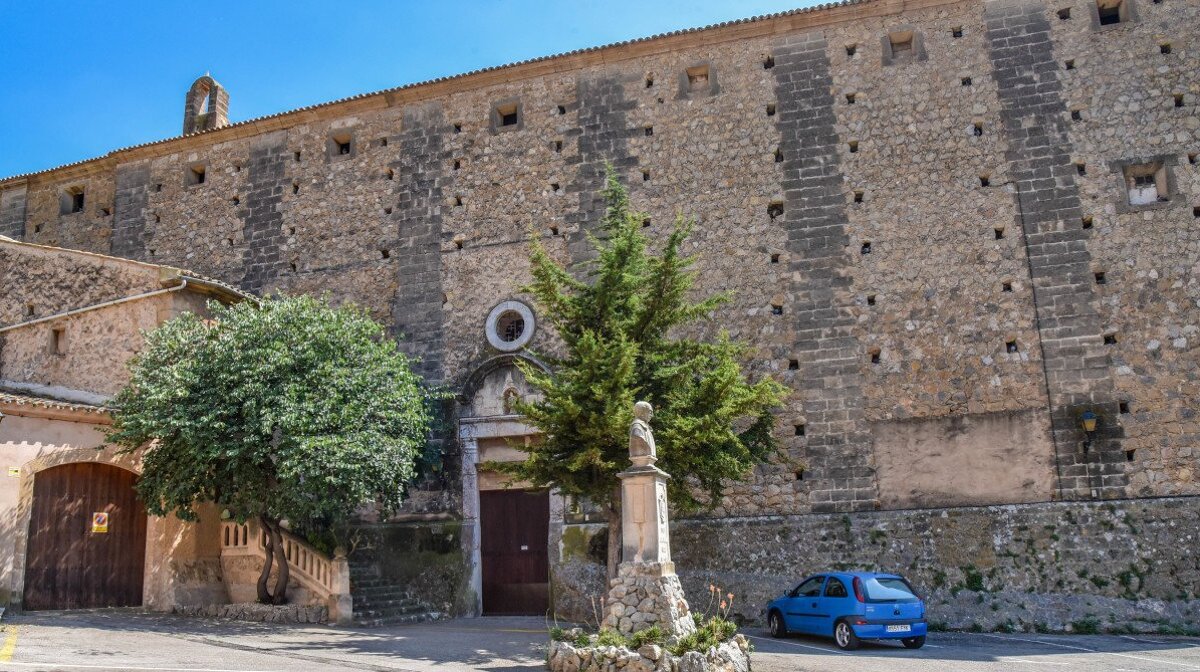 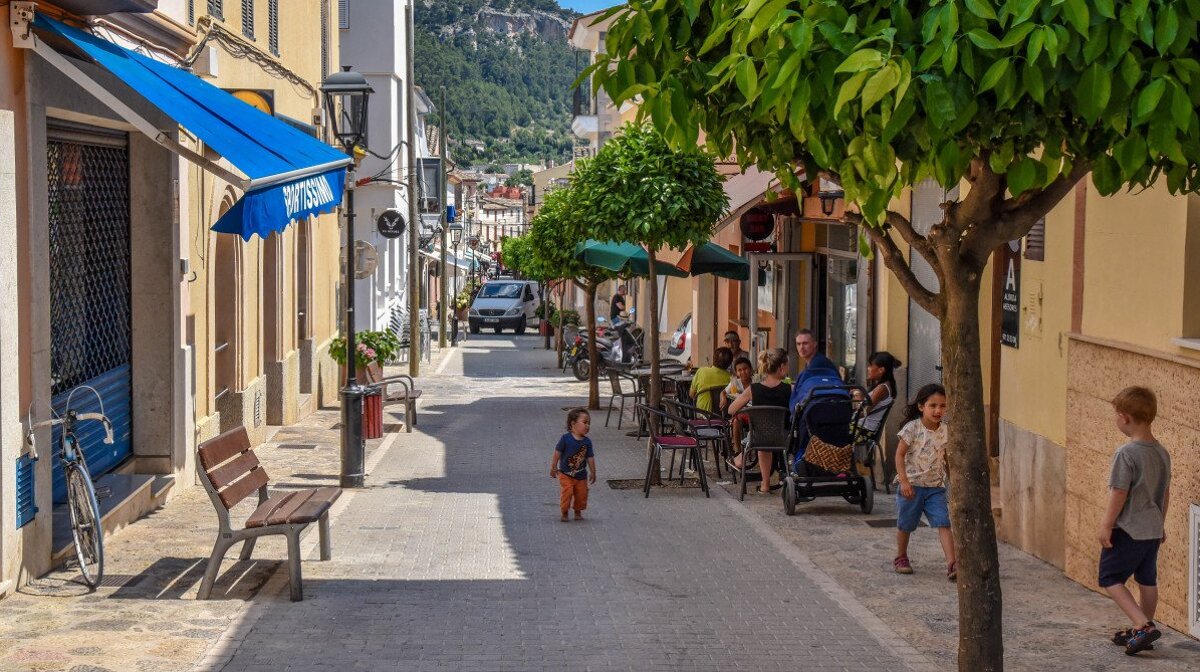 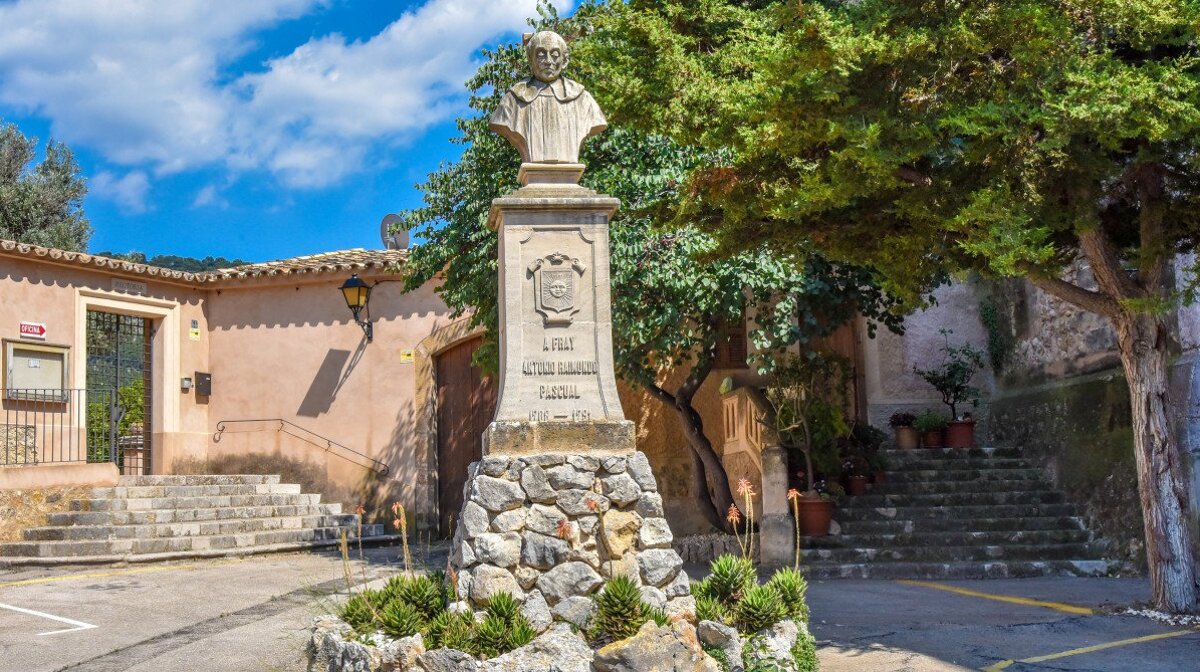 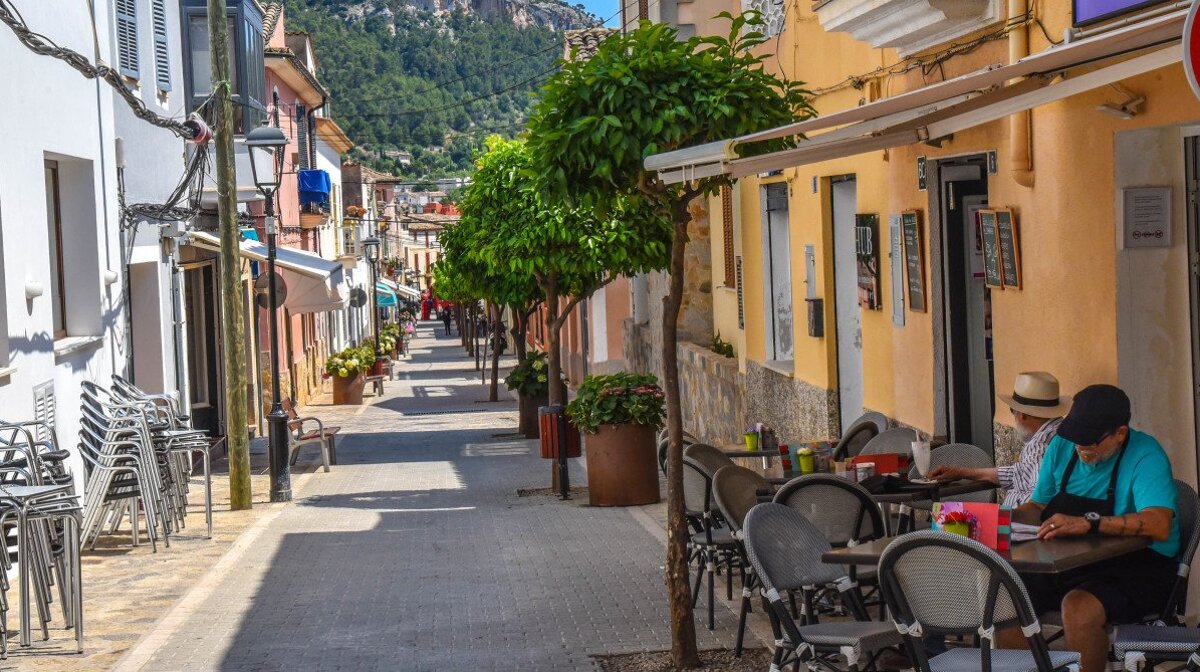 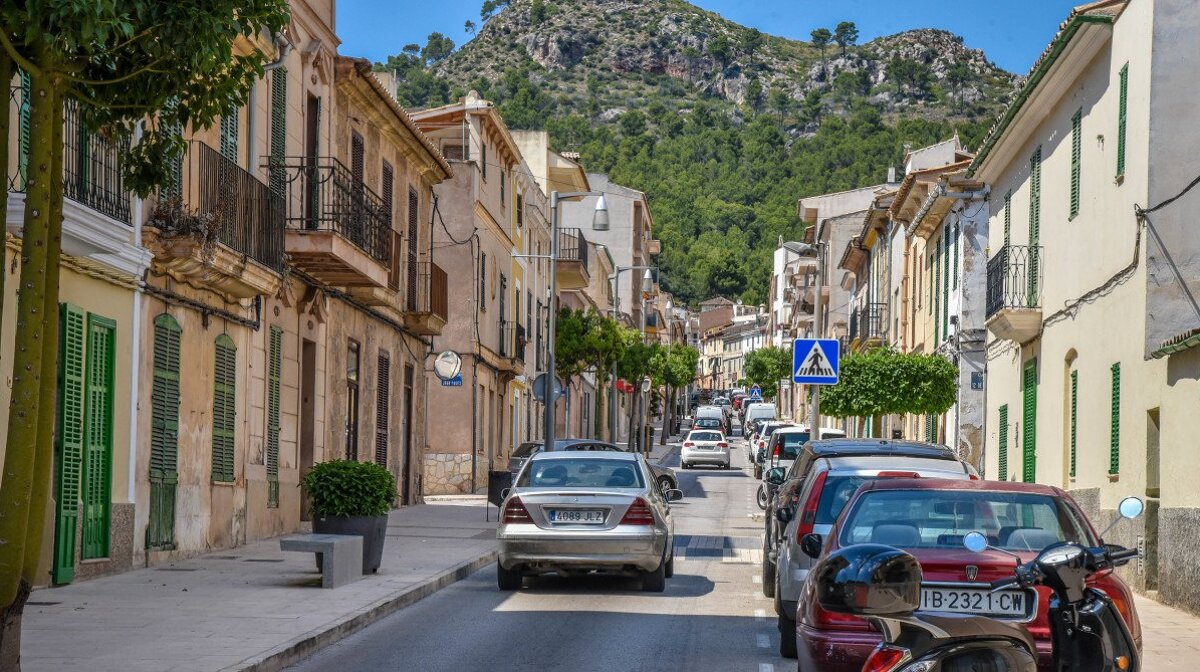 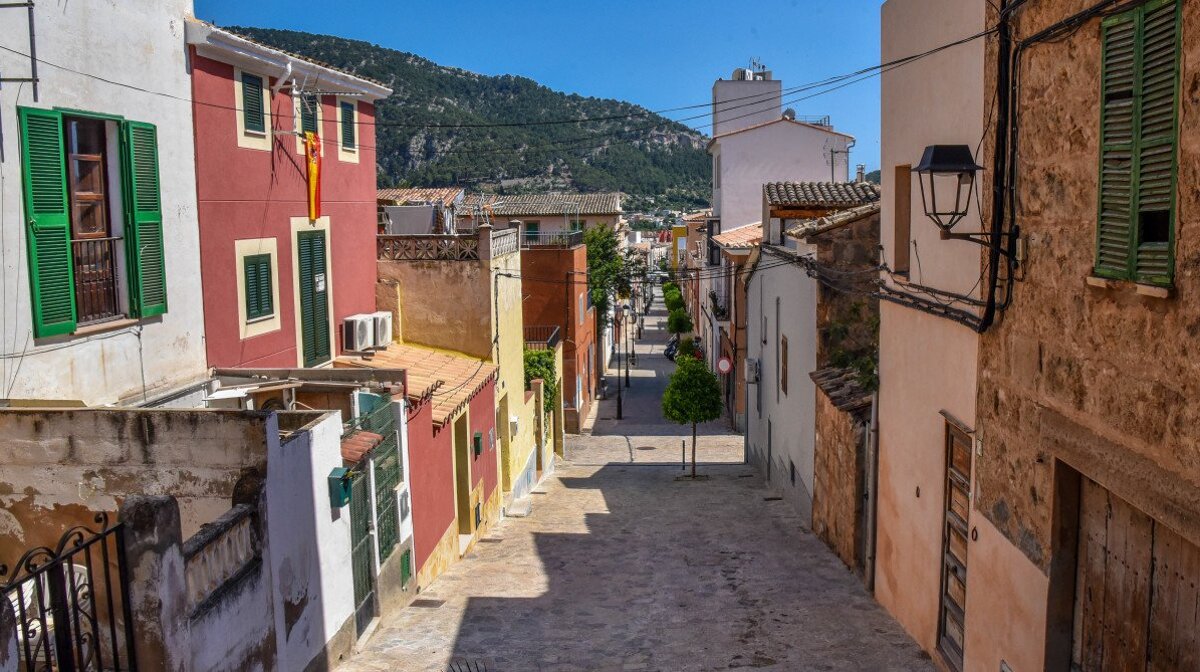 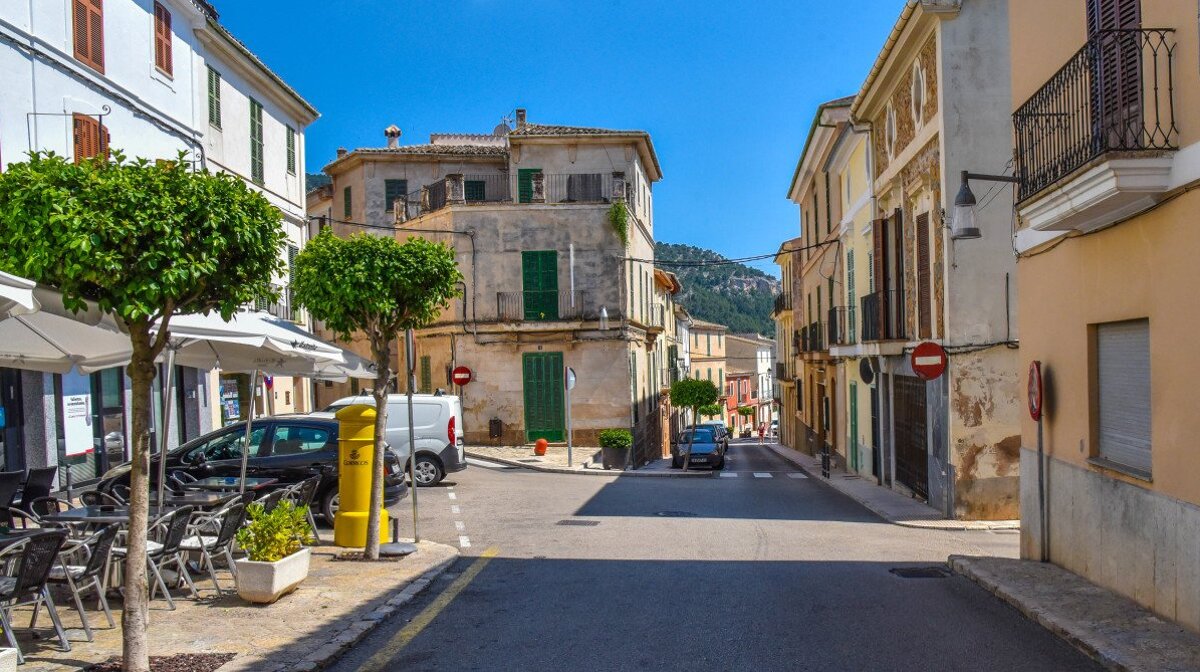 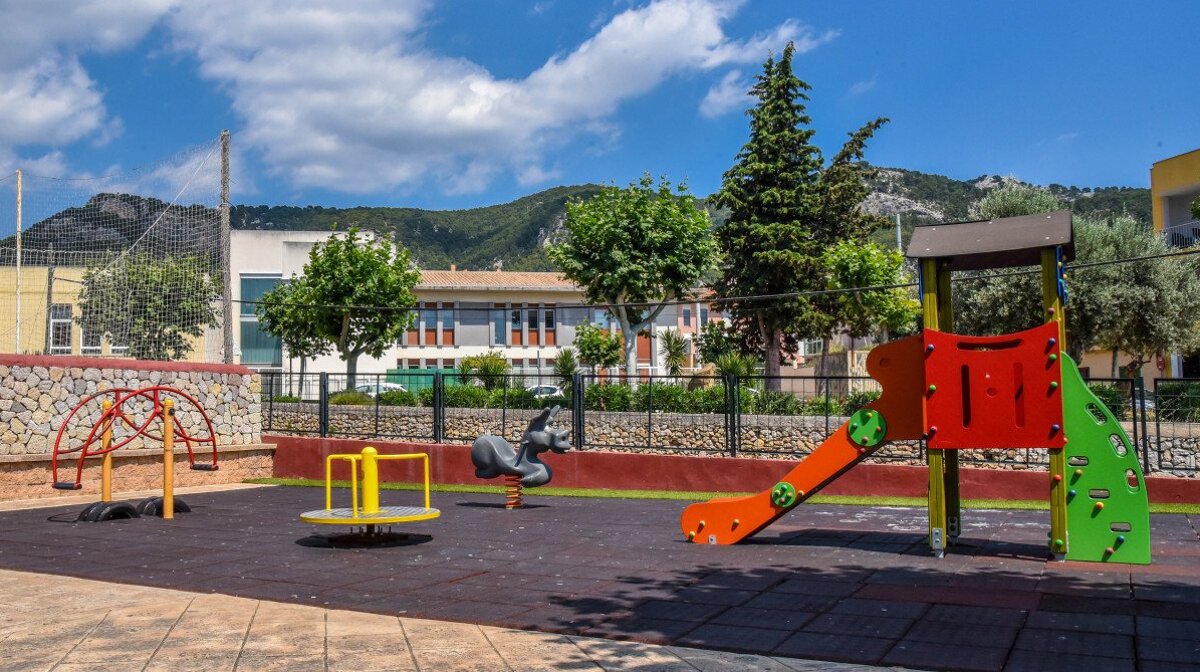 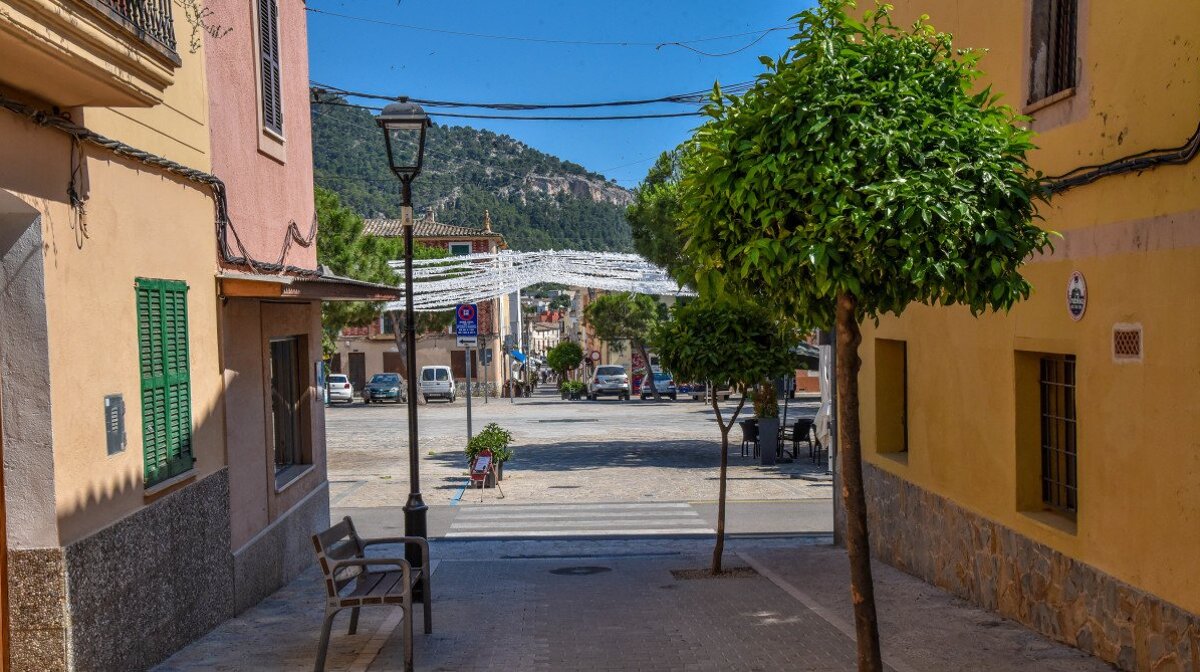 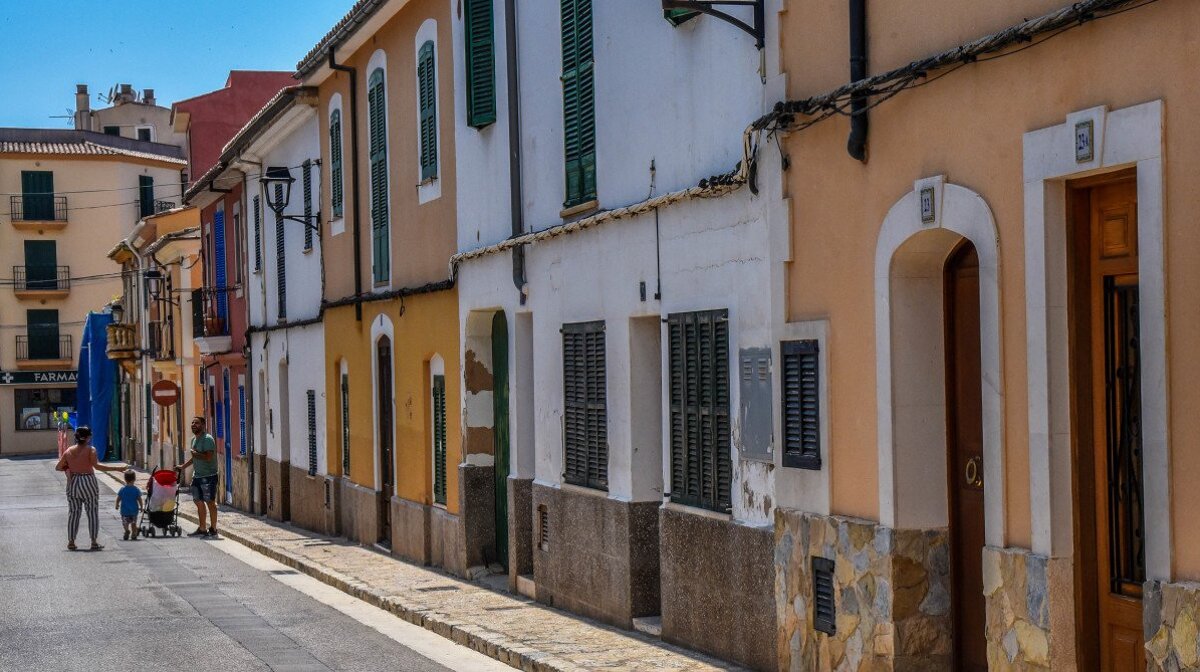 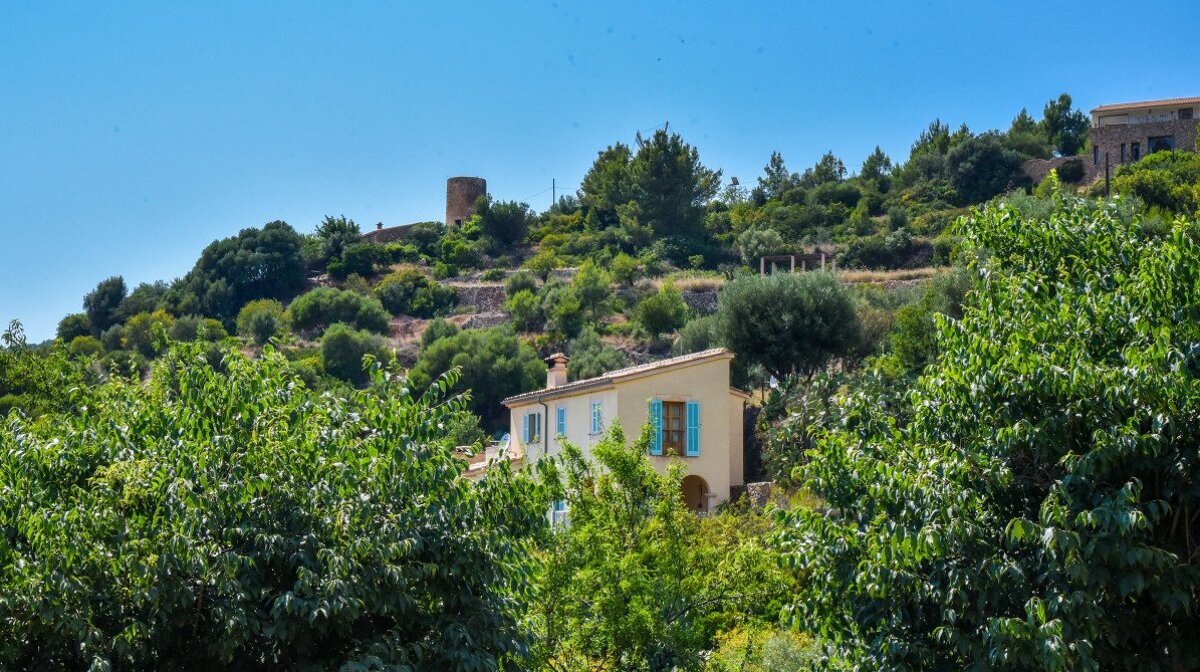 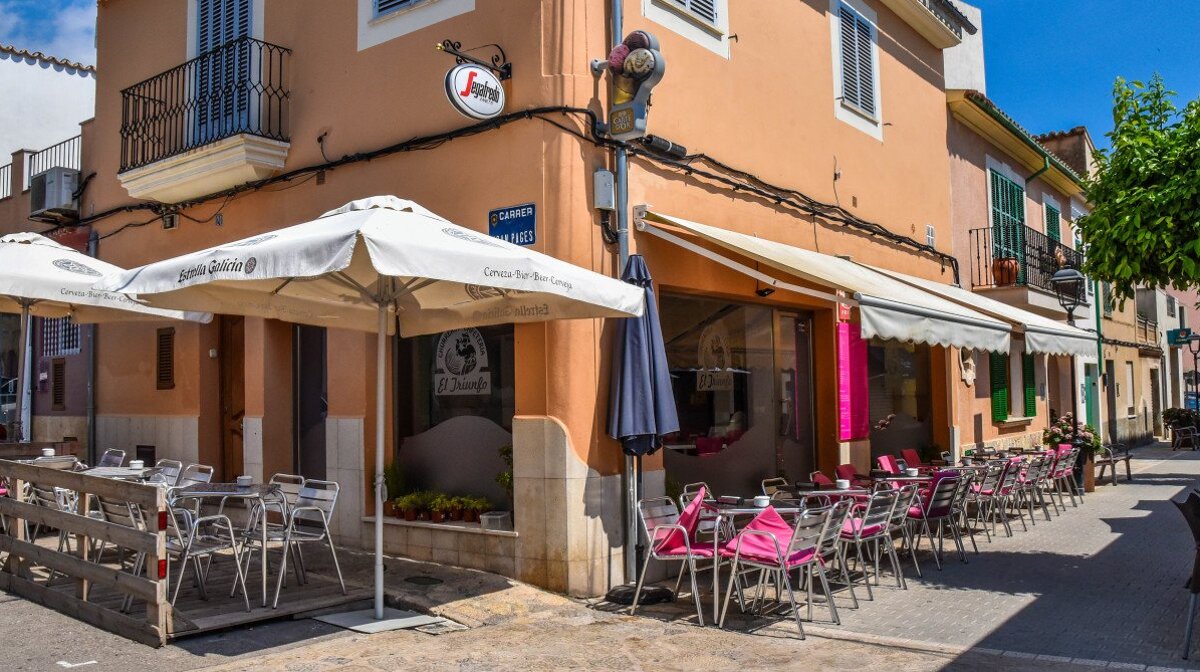 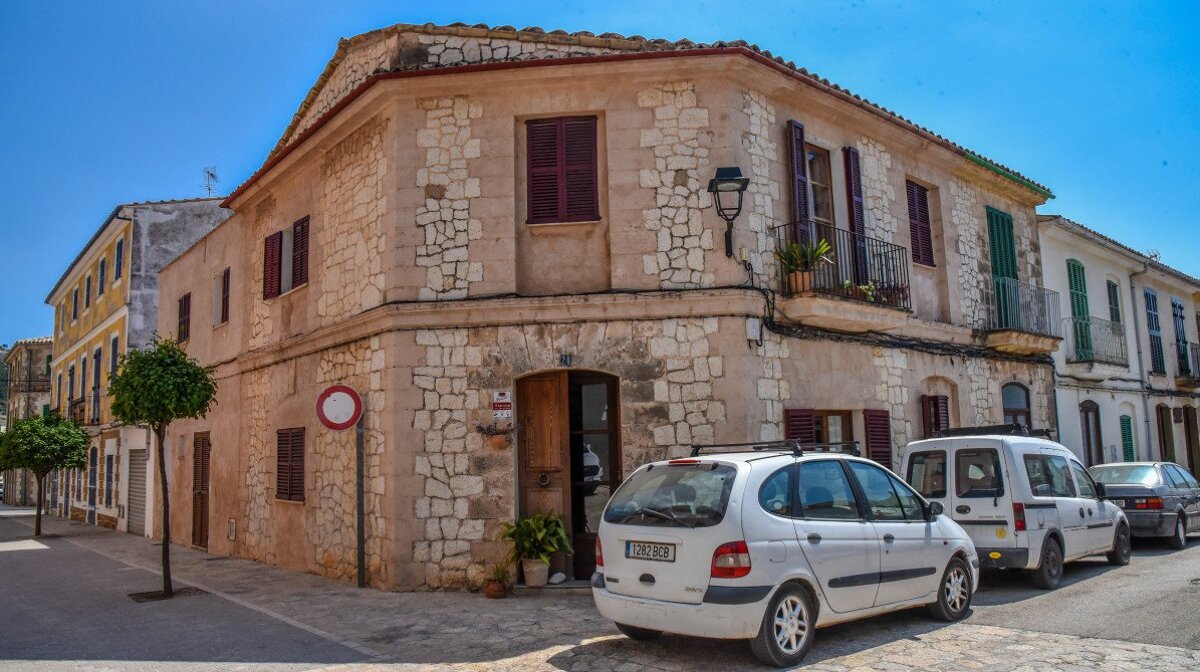 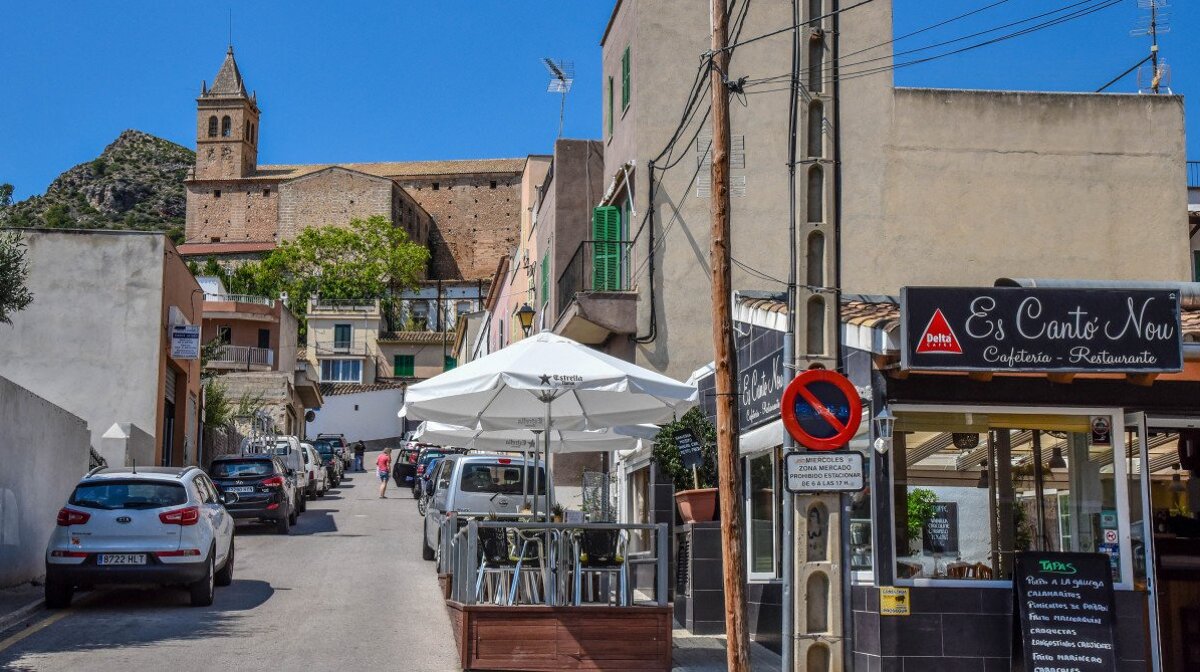 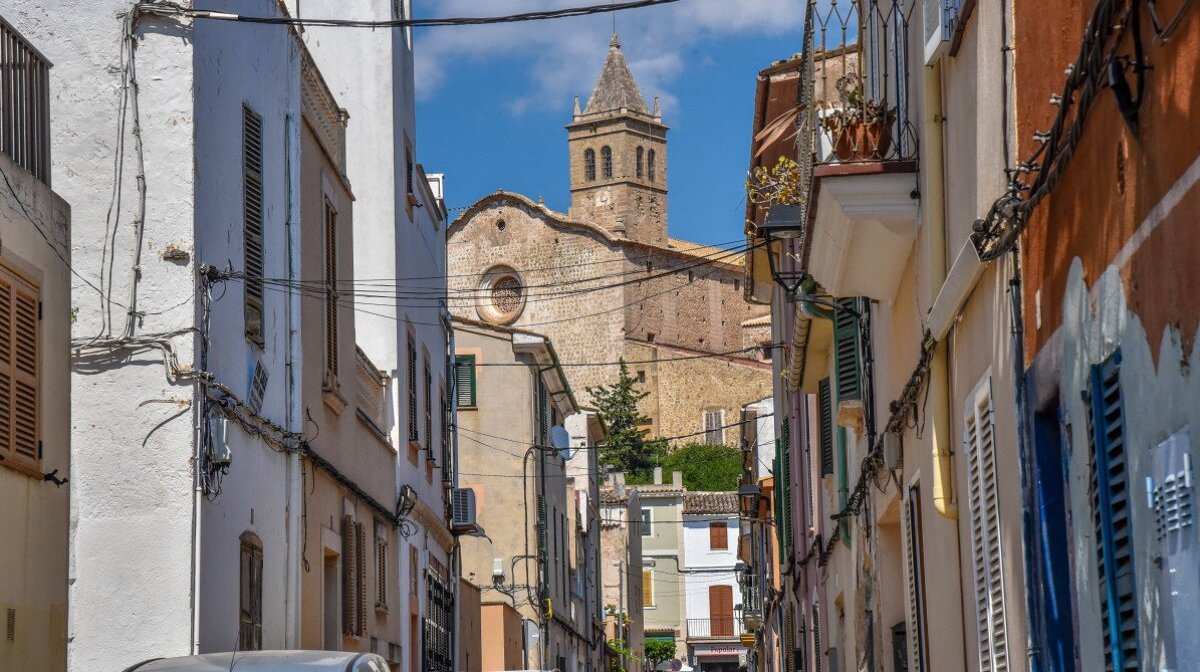 The town of Andratx is located in a valley on the southwestern tip of the Serra de Tramuntana mountains. Surrounded by orange groves and almond trees, which leave a 'snowfall' of blossom each February, Andratx is a pretty, sleepy rural town that embodies the authentic Mallorca.

Like many towns around the coast, Andratx was built several kilometres inland from its port, Port d'Andratx, in a bid to deter pirate raids. Today, Andratx remains a pretty and authentic Mallorcan town almost untouched by tourism, which means there are only a few options for visitors to base themselves here. The port and the surrounding hillsides, on the other hand, are scattered with holiday homes and villas targeting affluent tourists.

The town only really gets animated on Wednesdays when the quaint streets are taken over by market stalls selling vegetables, cheeses and fish. This is the best time to visit. When you have finished your shopping, climb to the top of the town to see the 13th-century church of Santa Maria.

Antique Andratx
It's likely that the name 'Andratx' has Latin roots, where 'antra' translates into caves. The nearby caves at Son Bosc and Son Fortuny are a couple of examples that were used by humans in prehistoric times. Traces of the Talayotic culture (1300-1000 BC) are evident at Son Fortuny (Biniorella Talayot) and Es Castell in S'Arraco. The Romans arrived here in 123 BC but there are no significant remains of their presence on this part of the island.

The Middle Ages
The Muslim rule from the 10th century brought irrigation techniques to the area, creating large agricultural fields here. After the Catalan conquest in 1229, the area was ruled by feudal lords. Pirate raids in the 15th century saw some attempts to build a defensive wall around Andratx but this was never finished, probably because it's situated several kilometres away from the coast and up a hill - not exactly a pirate's dream we imagine!

The 16th to 18th centuries
The 16th and 17th centuries were blighted by poor harvests, leading to hunger and poverty and an exodus to the city. It was not until the 18th century that a recovery took hold. The implementation of a centralised state administration promoted agriculture and fishing to provide for the growing population.

From the 19th century
The town of Andratx expanded further in the 19th century when industries such as soap manufacture and timber processing plants were established here. This was not to last, however, and, by the end of the century, large numbers of the population migrated to the Americas and France. The next major boom was not until the 1960s when tourism began to establish itself. Major construction created residential areas around the coast of Andratx, in Port d'Andratx, Camp de Mar and Sant Elm. Nowadays, and tourism remains the main economic force in the area.

The church of Santa Maria was founded in the 13th century but the current building dates back to the 18th century. There are also a handful of modernist palaces in Andratx, including the town hall. However, Andratx's main cultural treasure is the impressive CCA - Andratx Art Centre, one of the largest establishments in the Balearics dedicated to the creation and exhibition of contemporary art. To the general public, it offers a unique cultural experience, whereas the studio program is open to national and international artists.

There are several beaches near Andratx, mainly located around the neighbouring coastal areas of Sant Elm, Port d'Andratx and Camp de Mar. The closest ones, in Camp de Mar, are only within a 5-minute drive or a 15-minute bus ride away.

Andratx hosts a lively market on Wednesday mornings where you'll find a wide selection of local produce, handicrafts, clothes, pottery and flowers. There is a spring agricultural fair held at the beginning of April, which is one of the town's biggest events of the year and a great family day out. People will travel from across the island to take a look at livestock and an assortment of modern and old farm machinery or to buy some local produce or arts and crafts made on the island.

Sant Pere (or Saint Peter in English), is the patron saint of fisherman as well as of the town of Andratx and is celebrated on the 29th of June. The celebrations kick off with a high mass in the church of Santa Maria. There is a full program of activities which include music concerts, exhibitions, sporting events and more.

Things to Do in Andratx

Andratx is set in beautiful countryside in the foothills of the Serra de Tramuntana mountains, only a few kilometres from the coast, making it an ideal base for lovers of the great outdoors.

Cycling
From Andratx, cyclists are spoilt for choice when it comes to cycling routes. The roads and scenery are very diverse, with a choice of coastal paths or thigh-busting ascents and descents found deep in the Tramuntana mountains. The route from Andratx through to Port de Pollença has been described as one of the best in the world. It passes through some wonderfully pretty coastal villages including Estellencs and Banyalbufar then cuts across through the iconic mountain villages of Valldemossa, Deia, Soller, Lluc and Pollença before ending in Port de Pollença. Whichever route you decide to take, there are various companies on hand to rent you a bike.

Hiking
Being at the bottom of a valley on the edge of the Serra de Tramuntana mountain range, there are plenty of walking trails to try in the area. The first stage of the famous Dry Stone Route starts in Port d’Andratx, travelling to Coma d’en Vidal. Tramuntana Tours and Mallorca Hiking offer local hiking guides to take you on the best routes.

Golf
Andratx Golf Course is an 18-hole championship course which can be found near Camp de Mar, just a few kilometres from Port d’Andratx. The signature 6th hole here will challenge even the most experienced golfers, as it is known as the “Longest Hole in Spain” at 609 metres from the back tees.

Sa Dragonera Natural Park
The Natural Park of Sa Dragonera island is situated around 10km away, in front of the beach town of Sant Elm. There are frequent boat trips connecting this coastal village with the beautiful, uninhabited island.

Most of the restaurants in this area can be found down the road in Port d’Andratx but there are a few traditional style eateries and Italian restaurants in Andratx too.

Restaurante Sa Societat is an authentic Mallorcan restaurant, popular for its menu of the day and traditional Spanish dishes like paella. Its cute little courtyard provides the perfect setting to kick back and relax with some sangria and good Spanish cuisine. This restaurant is a favourite amongst the locals, so you feel like you really are in the midst of the real Mallorca here. Es Canto Nou is another great little Mediterranean restaurant with a more casual vibe, boasting a bright and airy space with a small courtyard for al fresco style dining. Expect fresh seafood and homemade Spanish cooking here. Restaurante la Plaza and Mille Gusti are the friendly little Italian joints in town servicing the locals. Between Andratx and Port d’Andratx, there’s Oliu Restaurant, headed up by a highly regarded young Mallorcan chef who offers modern Mallorcan food at an impeccable standard

The town of Andratx offers a couple of small hotels and holiday homes for rent. The neighbouring areas of Port d'Andratx and Camp de Mar have more choice of accommodation including luxury villas and boutique hotels.

The main place to stay in Andratx is Hotel Son Esteve, an old country house turned hotel within a 15-minute walk from the town centre. Set in landscaped gardens and with countryside views, you have some of Mallorca’s most beautiful scenery on your doorstep. The rooms are elegant yet traditionally styled, and there’s a lovely outdoor swimming pool so you can kick back and relax in a tranquil setting.

How to get to Andratx

By car
Andratx is just under a 40-minute drive from Palma airport. Head towards Palma along the Ma-19, then use the Ma-20 ring road around Palma to avoid the city centre. Follow signs to take the Ma-1 towards Palma Nova / Andratx. This road will take you all the way to Andratx.

Public transport
There is no direct bus to Andratx from the airport. You can, however, catch bus number 1 to the bus station at Plaça s'Espanya then take either the 100 or 102 TIB bus which travel between Palma and Andratx every half an hour and take about an hour in journey time. Please check the latest timetable carefully. The 100 connects Andratx to Santa Ponsa Peguera, Camp de Mar and Sant Elm. The 102 also travels onto Port d’Andratx instead of Sant Elm.