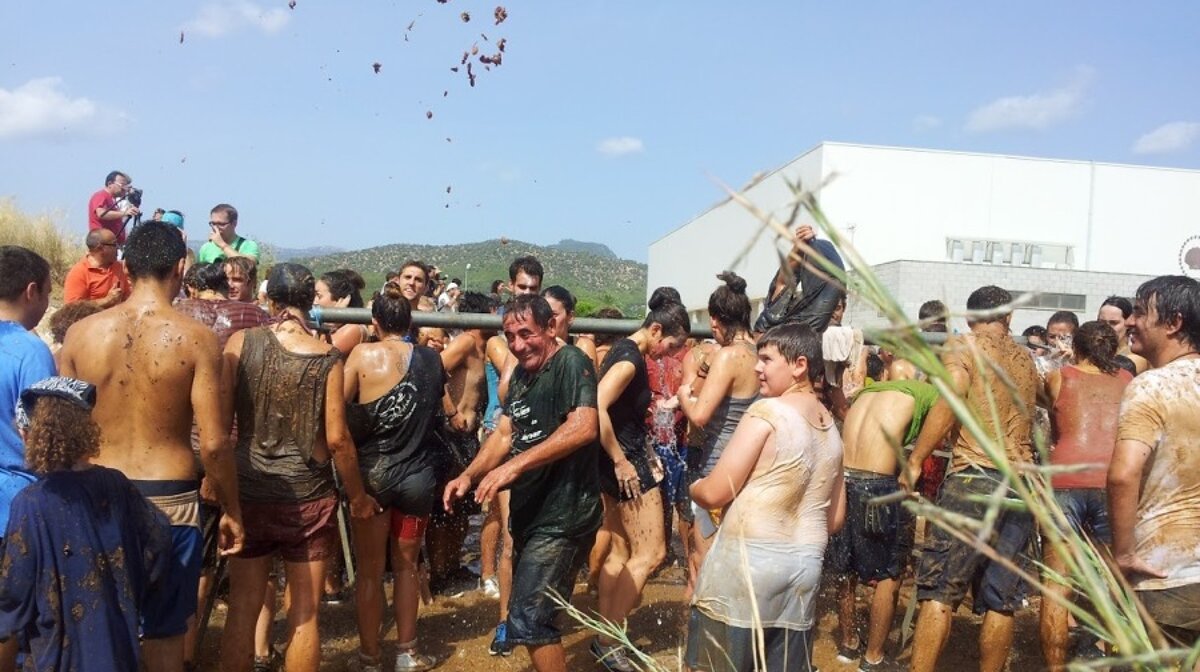 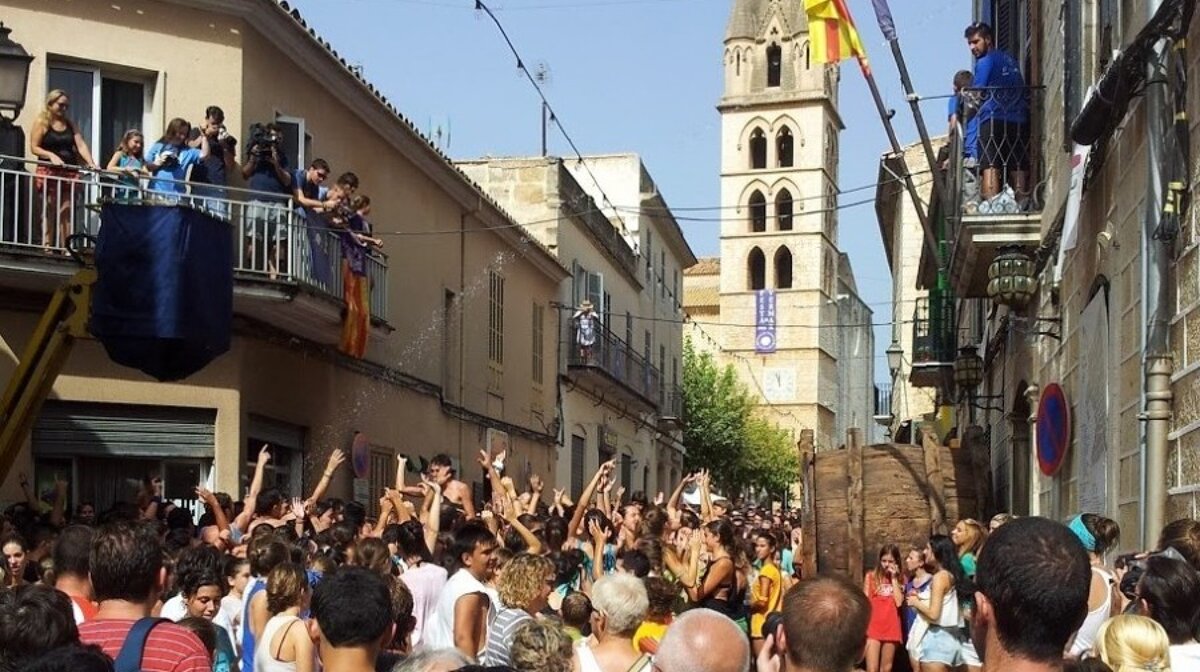 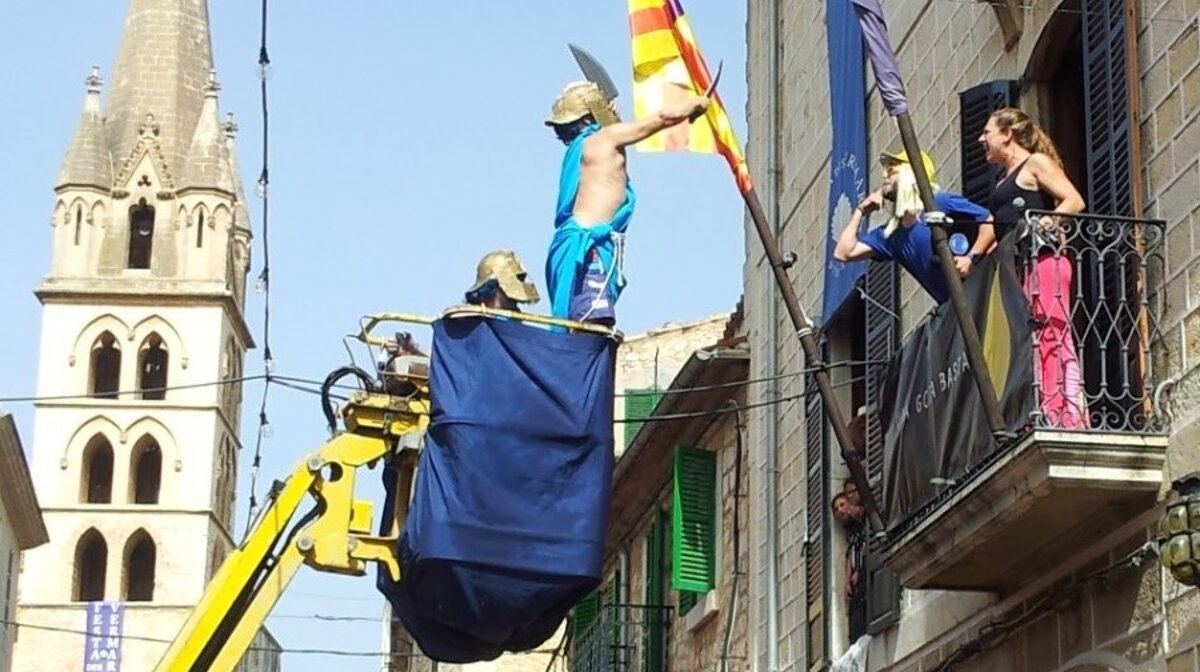 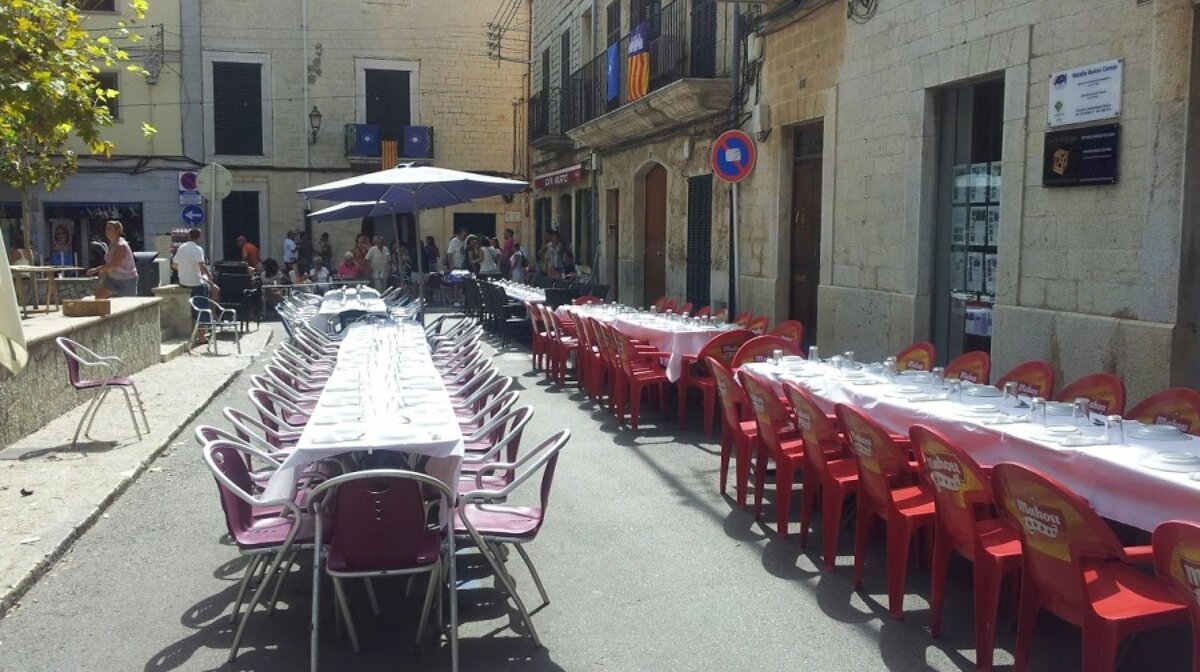 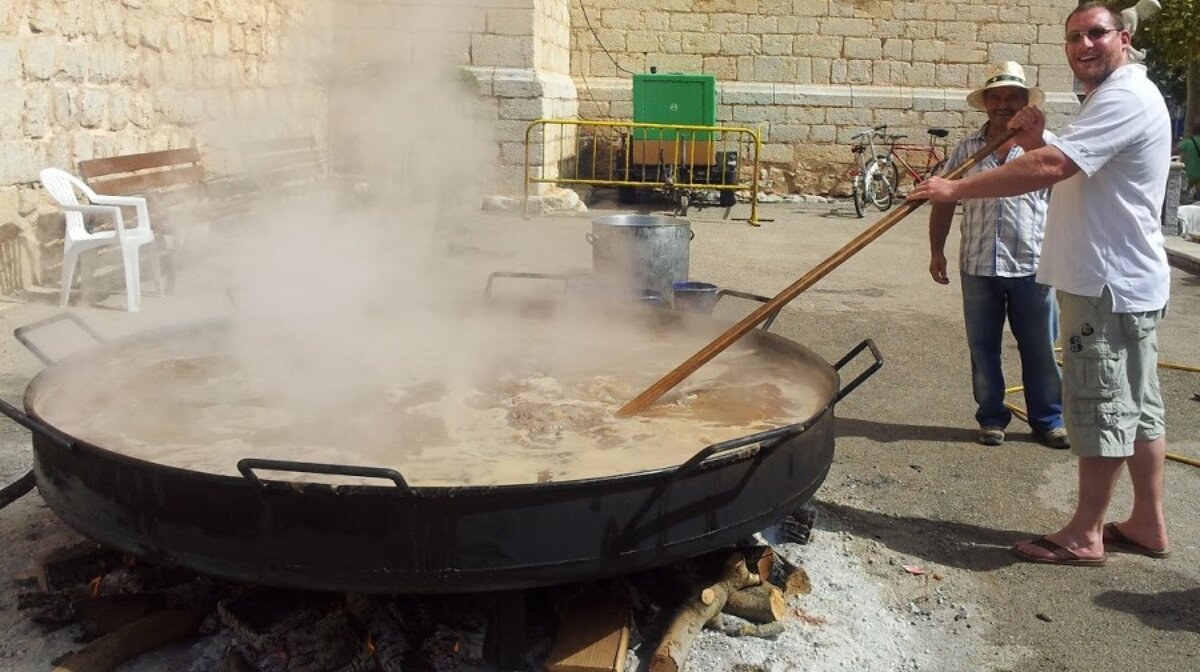 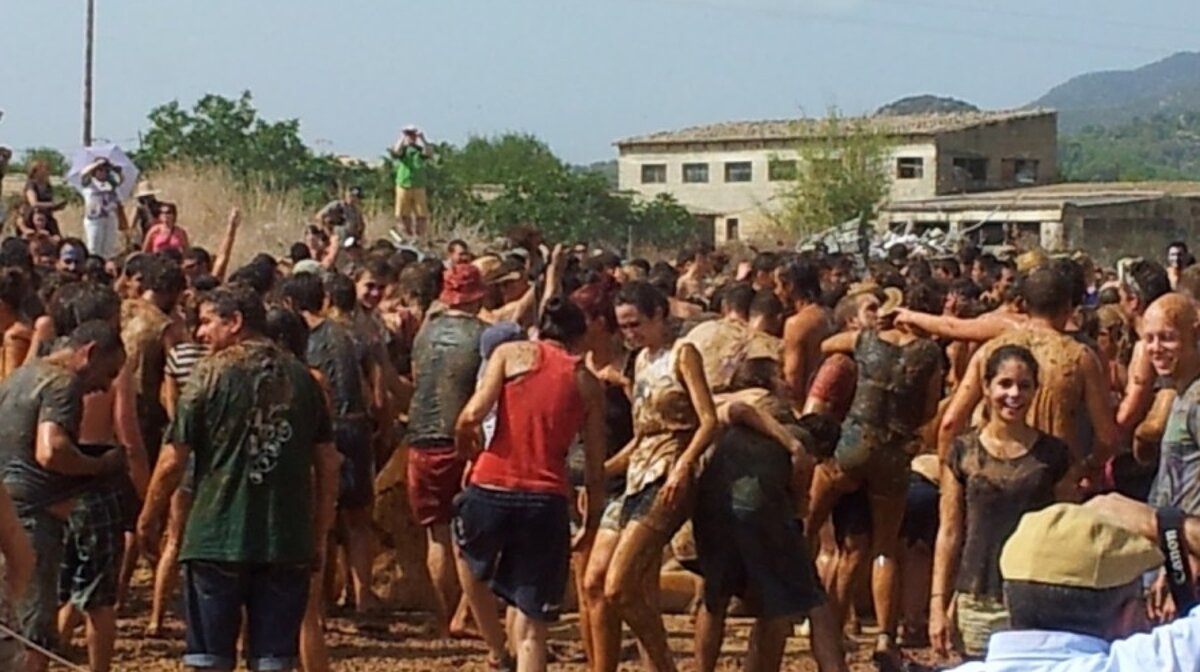 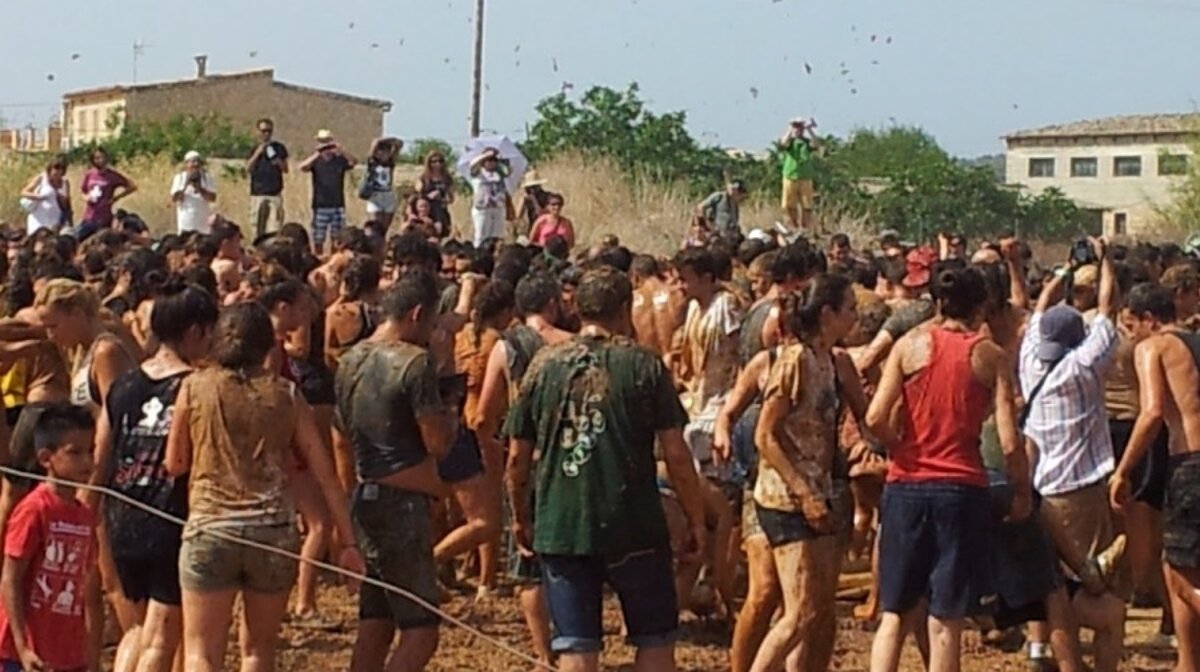 This year the town of Binissalem celebrates the 50th anniversary of the Festes des Vermar, the grape harvest festival and I was lucky enough to be there for the great grape battle. This is one of the liveliest of all the celebrations that are held during the festivities that go on from the 12th until the 28th of September this year.

We gathered en masse outside the town hall near the main square in this picturesque town. The streets were absolutely rammed with people of all ages waiting for the proceedings to start. From the balcony of the town hall, we were sprayed with refreshing water from a hose, whilst we waited for Dionysus, the god of the grape harvest to make his appearance. We were treated to a surprise appearance by David Guetta…actually, it was a little local humour on account of the cancelled concert earlier in the summer. There was a bit of singing of a very catchy little ditty “Bini-Bini-Bini-Binissalem” and a bit of to-ing and fro-ing with another catchy ditty of Oh-la-la and oh-le-le, a bit of jumping, some dancing and finally Dionysus made his appearance in a cherry picker!

After making his way on to the town hall balcony to vanquish the David Guetta pretender, he could proceed to give his blessing to the wine harvest. The group of vermadors and vermadores (male and female wine harvesters), previously chosen by a public vote held in the town, made an appearance on the balcony too, this time without their traditional harvest clothing, to gee up the crowd and lead them in several rousing renditions of various local songs and shouts of “Visca Binissalem” and “Visca Vermada”. Finally, Dionysus recited a poem and gave his blessing for the great grape battle to commence and with the firing of a rocket from the balcony the exodus from the town centre commenced.

We made our way through the beautiful streets of Binissalem towards the sports field on the outskirts of town. There we were greeted by the sight of three enormous piles of grapes and a mini pool full of water balloons. The young crowd gathered all around the heaped mounds of harvested grapes and upon the release of yet another rocket the battle commenced. The day was a hot one and the water balloons offered welcome relief from the heat of the sun. The water, grape juice, squashed grapes and the red earth of the field was soon amalgamated into clumps being hurled in all directions and all who were taking part were soon covered from head to toe. This year saw the biggest participation in the battle, the locals being joined by an ever increasing number of tourists who want to take part in this amusing tradition. Once the grapes had been thrown, squashed and mashed and everyone in the crowd had enjoyed themselves thoroughly, they could proceed to the washing station to try to remove some of the head to toe covering of grapes and mud.

After the battle, the town hosted a sit-down meal in the main church square for approximately 1400 people where the traditional fideus de vermar dish was served. The town’s rules are very strict regarding the meal unless you come dressed in the traditional costume of a grape stomper you are not allowed to partake. As we were leaving the main square, after chatting to the men who were cooking the fideus in what looked like the world’s largest paella pan, we were met with hordes of people dressed in white linen outfits making their way to the afternoon feast.

We had a fantastic and fun time at the grape battle of Binissalem and that catchy little ditty “Bini-Bini-Bini-Binissalem” has been hummed and sung on a daily basis, forever etched in our minds.