Santa Ponça is getting reading to commemorate the successful landing and conquering of the Moors by King Jaume I in 1229 with eleven days of festivities.

From the 30th of August to the 9th of September 2018, Santa Ponça will celebrate its annual fiesta of the King with music, dancing and theatre. On the 10th of September 789 years ago, Jaume I disembarked along the coast at Santa Ponça with 15,000 men and 1,500 horses to reconquer the island from the Moors. This historic event played a huge part in shaping the island into what it is today and the reenactment of the king's landing is one of the highlights of the week. 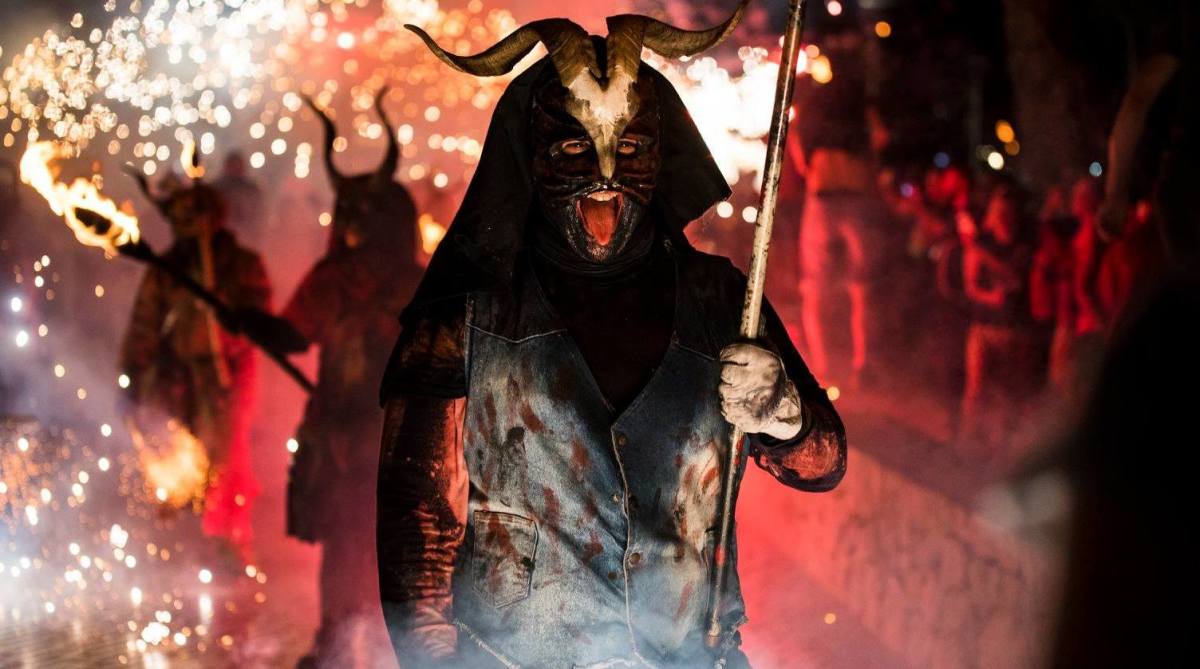 If you've yet to attend a traditional Mallorcan town fiesta, then clear your calendar for the week because the Festes del Rei en Jaume have a packed programme which delivers all the principal ingredients. There will be 'Gegants' (giants), a 'Correfoc' (a night of demons and fire), a medieval market, traditional dance and open-air concerts. 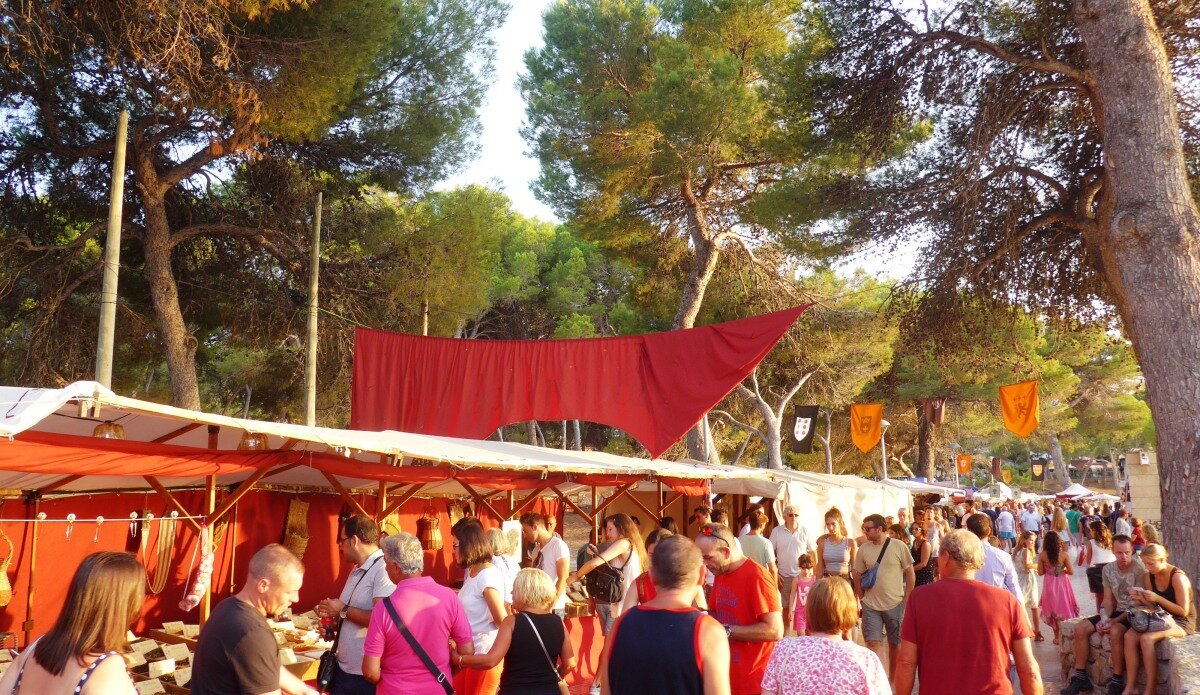 Plaça Pinada and the seaside promenade will be where the main action happens during the festivities. From Thursday 6th through to Sunday 10th, from 12:00 to midnight, there will be a medieval market along the promenade selling a variety of artisan products including gastronomic treats, all manner of herbs, puppets, wooden toys, jewellery and leather goods. There will also be street performers and traditional 'xeremiers' playing their lively flutes and bagpipes, infusing the atmosphere with medieval charm. 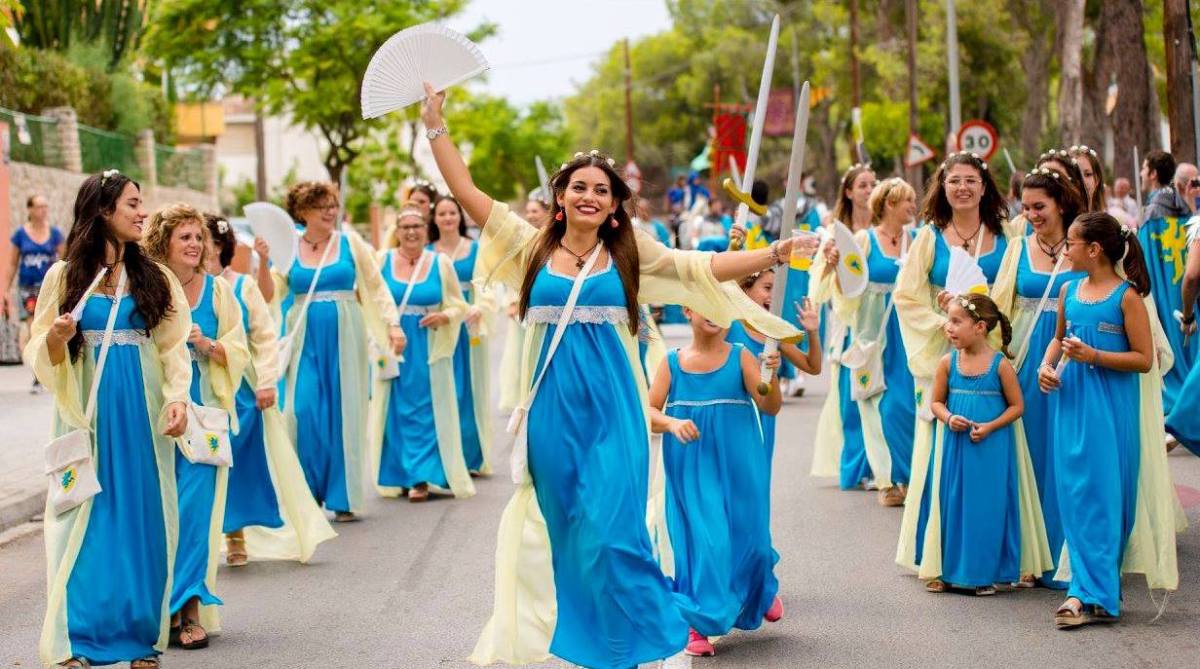 The main protagonists of this event are the various 'colles' (local groups), who dress up as Moors and Christians. On Sunday 2nd at 20:00 there will be a theatrical show performed by all the groups as well as the announcement of the Kings of the Fiesta. A parade under the title 'The footsteps of King Jaume' will take place along the streets of Santa Ponça on Wednesday 5th from 19:00 in which performers and musicians will guide you through the places connected with the king's arrival to Mallorca. Prior knowledge of Catalan recommended for this event! 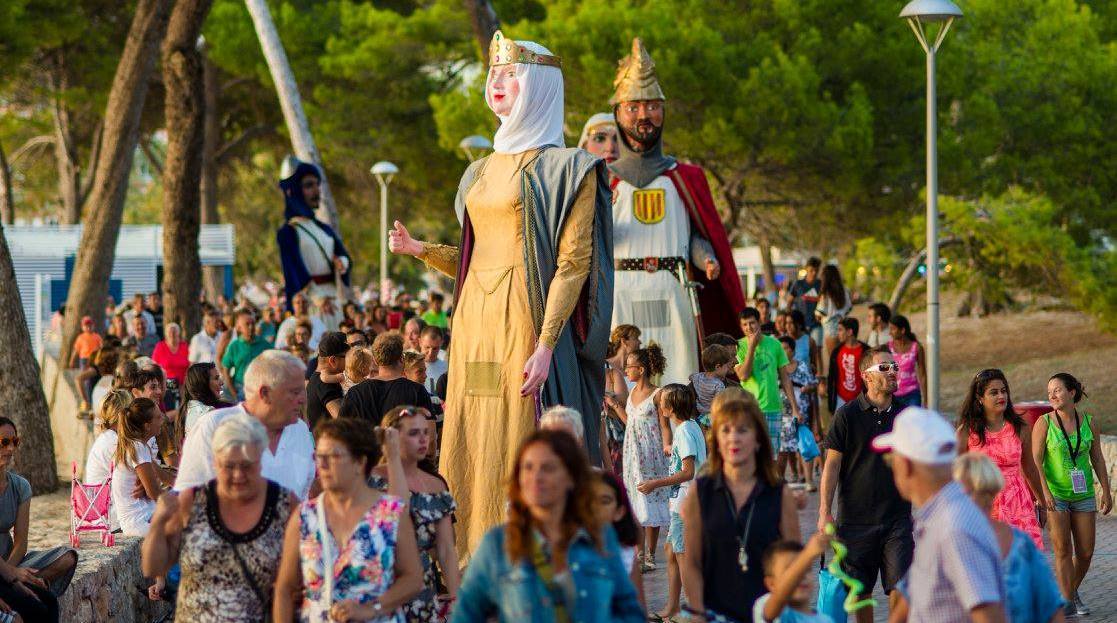 Luckily, you don't need to know the lingo to enjoy the great atmosphere created by this vibrant community. Don't miss the 'Trobada des Gegants' (Giants Gathering) on Saturday 1st at 18:30 in Plaça Pinada. These enormous structures mimicking important historical or popular characters in Mallorcan history will parade around town. 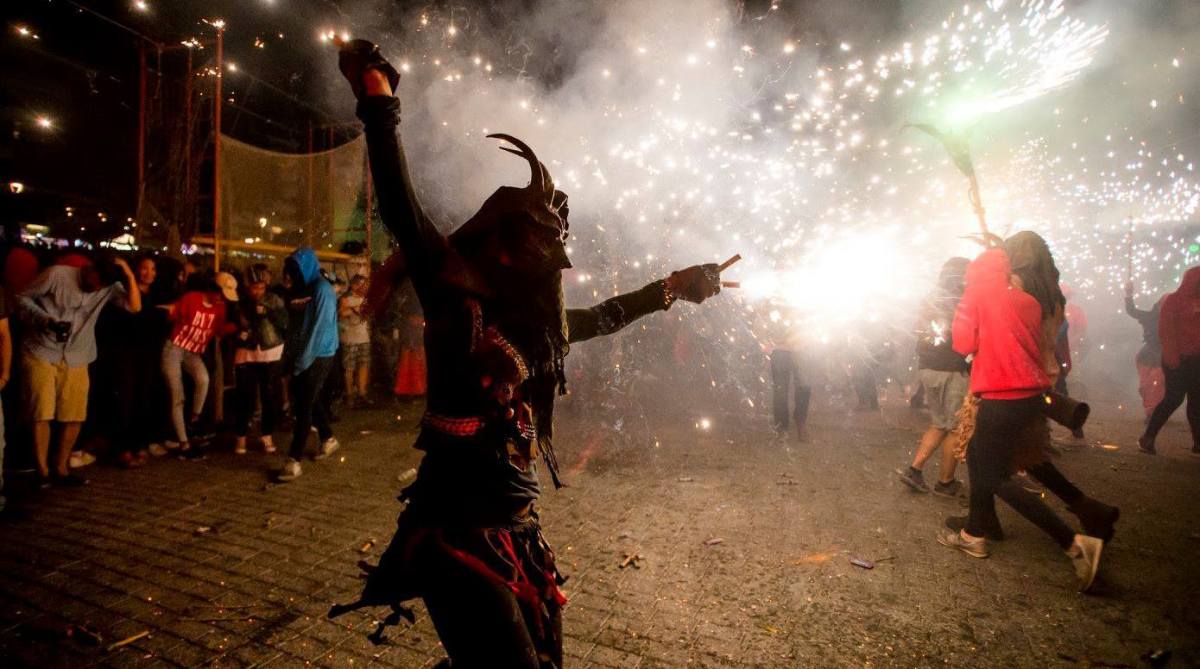 The Correfoc takes place on Tuesday 4th at 22:00. This is a must-see spectacle which is played out in numerous locations throughout Mallorca during holiday periods. The seaside promenade fills with demons wielding tridents which are lit up with screaming fireworks. The air grows thick with the heady scent of gunpowder and the beat of the drum will doubtless set your pulse racing. Cover up if you want to get really close. Locals used to the celebrations will dance alongside the demons as sparks fly. 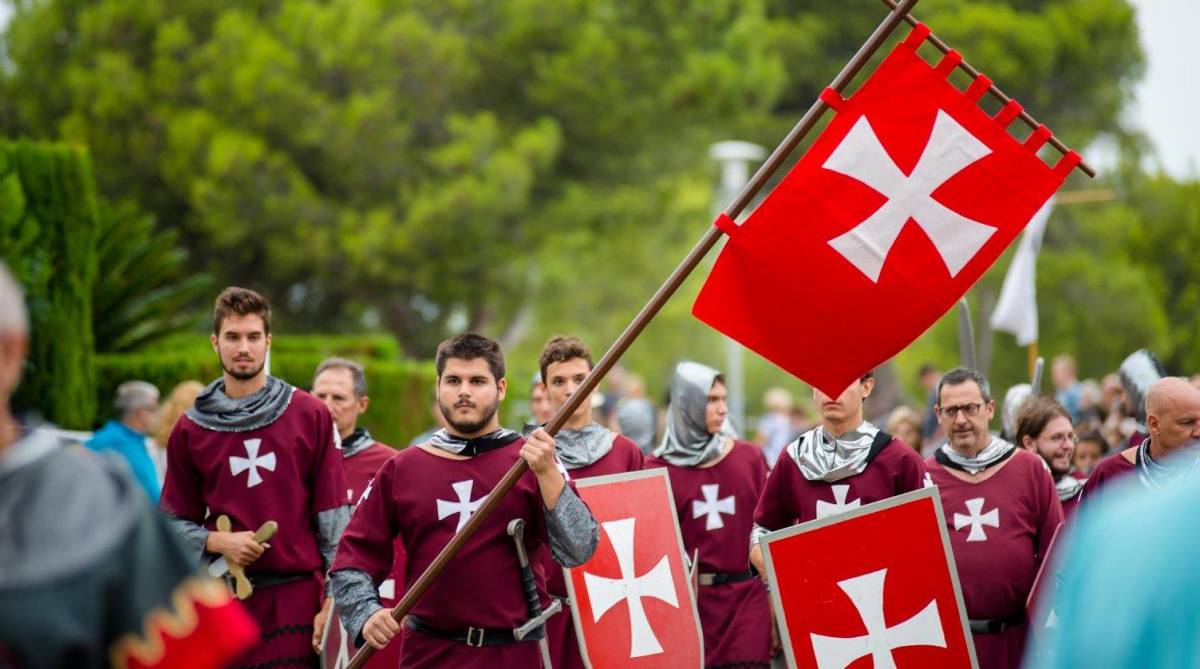 The great reenactment of Jaume I's disembarkation takes place on Saturday 8th September at 17:30 at La Creu de Santa Ponça. It's a 20-minute walk from the centre and you'll see plenty of families dressed as Moors or Christians heading that way. The public line the street looking out to sea, waiting to spot Jaume I's ship on the horizon. Eventually, a ferry decorated with Catalan flags arrives and a stream of knights proceed to the shore, forming a line with swords raised in salute to welcome their king. 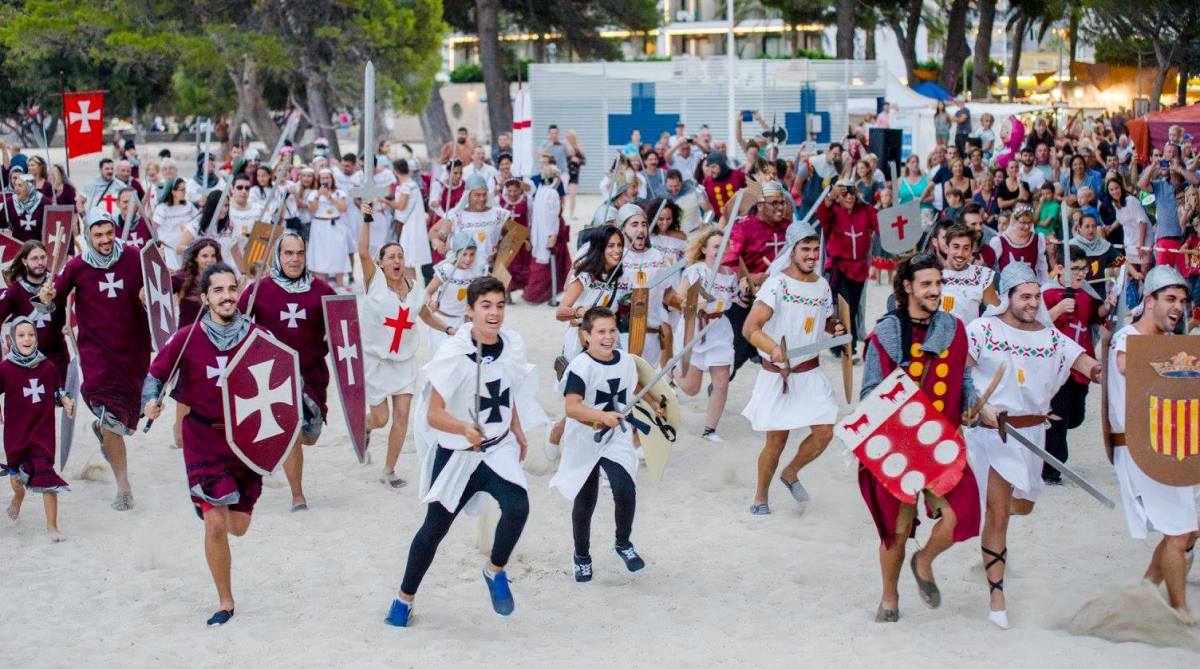 A procession made up of drummers, wooden giants, knights, moors and puppet horses makes its way to the small cala, Calò d'en Pelisser, where they perform their first fight. It's an amusingly chaotic scene with three or more generations involved in the show. The final battle is performed at Playa de Santa Ponça as dusk falls. It is preceded with the Ball de Escarmots, a dance which involves a line of Moors and Knights hitting sticks together to the sounds of the drums and bagpipes. The festivities wrap up with music and firework displays on Sunday 9th September at 22:30. 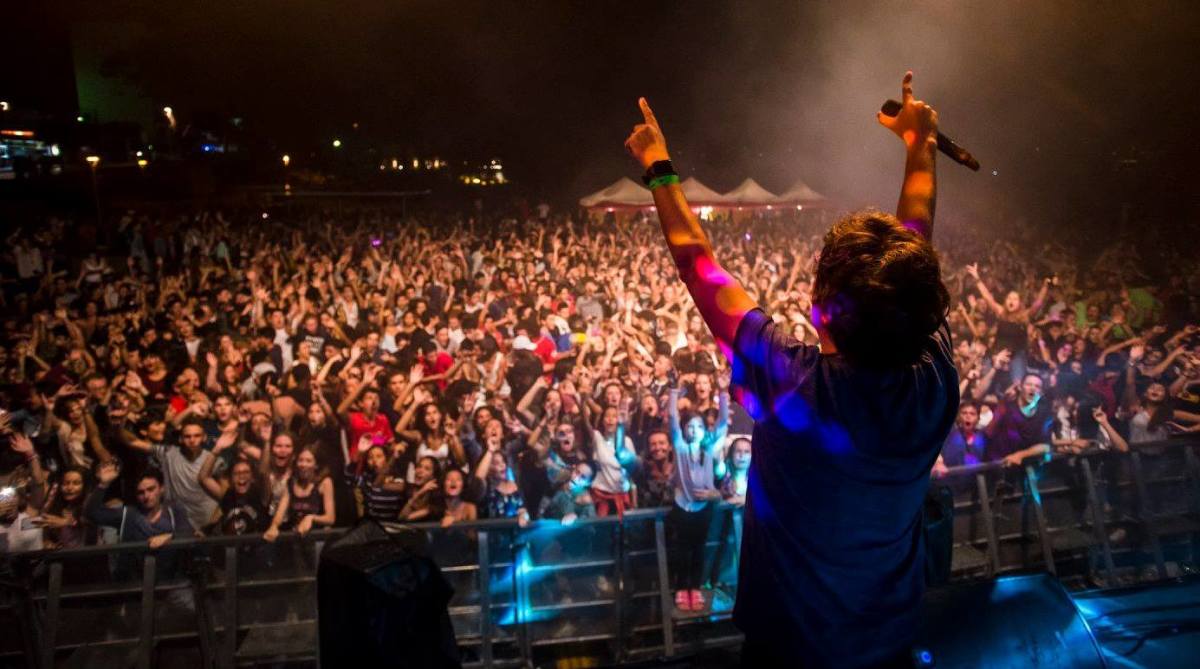 The Festes del Rei En Jaume aren't just about recreating the past. The programme includes plenty of modern activities too. There are open-air concerts and DJs most nights at Plaça Pinada as well as sporting events including Nordic walking, Aquagym and a swimming challenge in Santa Ponça Bay. Check out the official programme for more information or pick up a programme in English from a Tourist Office. You can also read Emily's review from 2016's event.

If you are planning on attending the fiesta, remember to book your table at one of the local restaurants as the town of Santa Ponça will be really busy during the festivities.